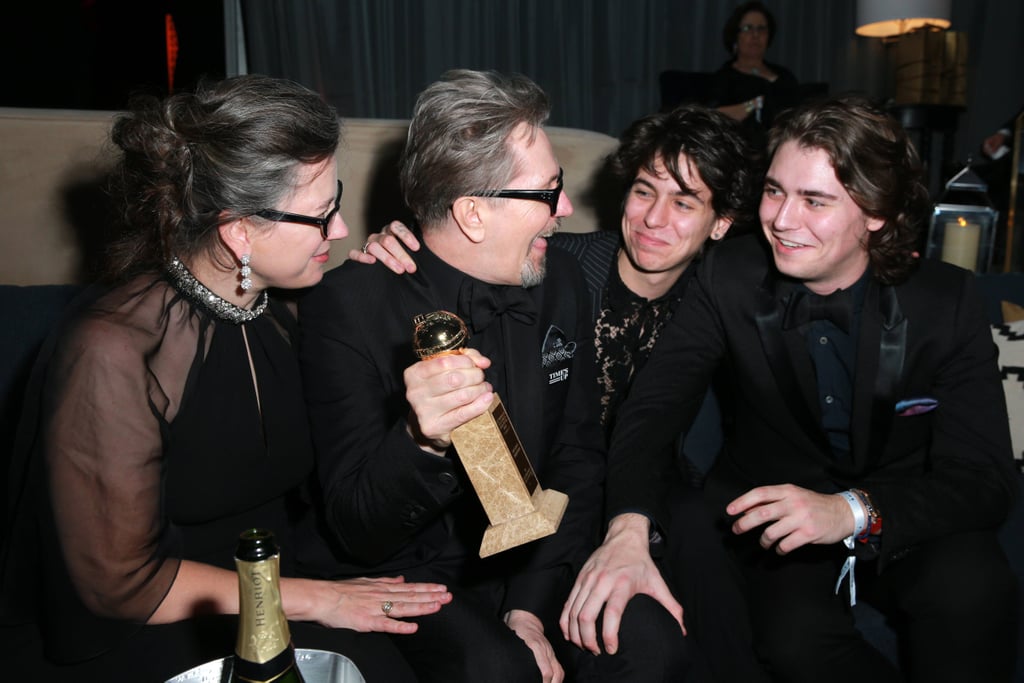 As he took to the stage to accept his Golden Globe for best actor (drama) for his portrayal of Winston Churchill in The Darkest Hour, Gary Oldman thanked his wife, writer and art curator Gisele Schmidt, who he says "put up with my crazy for over a year." She watched on from the audience with tears in her eyes as the actor elicited laughs from the crowd as he continued to explain, "She would say to friends, 'I go to bed with Winston Churchill, but I wake up with Gary Oldman,' which is I suppose better than the other way around."

The couple, who married in September 2017, looked totally loved up on the red carpet on the way to the awards, and Gisele later posed with Gary at the Focus Features afterparty, proudly kissing her award-winning husband. Inside, the pair was spotted giggling with two of Gary's sons, Charlie and Gulliver (whose mother is Gary's ex-wife Donya Fiorentino). This was not only Oldman's first Golden Globe win; it was his first ever nomination. Given his body of work, that may come as a surprise (and indeed, the actor himself has been critical of the awards in the past), but one thing's for sure: he definitely looked excited that this moment had finally arrived! Read on to see his best moments from the night.

British Celebrities
Olly Alexander Says New Years & Years Tracks Are on the Way, Thanks to It’s a Sin
by Navi Ahluwalia 17 hours ago

British Celebrities
Is Dua Lipa Pregnant? The Star Responds to Those Suggestive Photo Captions
by Kara Kia 1 day ago

by Nikita Charuza 12 hours ago