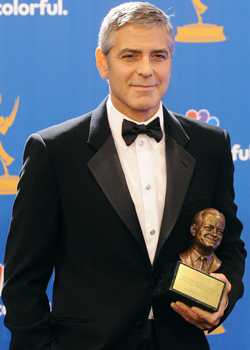 George Clooney made his way back to the Emmy press room to discuss winning the Bob Hope Humanitarian Award. He talked a bit about his humanitarian efforts and how he doesn't feel he should be awarded for "doing something he's supposed to do." In typical Clooney fashion, he also couldn't help giving props to his buddy Brad Pitt and poking fun at his former costar and friend John Krasinski. Here are more highlights:

Is there someone who has impressed you with their impact on the world?
George Clooney:
In terms of well-known celebrities, Brad's in New Orleans right now, and he's done a tremendous of job of trying to bring focus and build houses and hit us all up for dough and building houses. And he's really good at that.

What makes you want to get involved in so many programs?
GC: I don't particularly do more than anybody else in the position I'm in. I try to pick subjects that I can learn about and then focus on and then do as much as I can. If you have a tremendous amount of heat from the spotlight, then you're able to shine a little bit more of your light in a different direction. It's just deflecting. My dad calls it a celebrity credit card that you can cash in. Truly it's not more than, you can name dozens of people in millions of other industries that are doing the same thing. I think if you're in this position you should do it.

How did it feel to have Julianna Margulies present the award?
GC: It was pretty great. We've stayed in touch and we're good friends and we see each other when we're in New York. But it's still really nice. When she and I came back for the last episode and I came back for her leaving the show, you get the sense that people really do enjoy the fact that we ended up sort of together at the end. So it meant a lot to have her standing there. It was a nice thing.

Who did you bring as a date and what did you do today to prepare?
GC: She picked me up in Italy, Elisabetta. My day today was: John Krasinski came over to my house with a bunch of guys and we played basketball. If you see him later, he's limping. He's lost a step.

How is it being at the Emmys?
GC: It's fun. The show's really good tonight. Jimmy Fallon is just killing it out there, he's really funny. It's fun back in the green room because you see a lot of people you haven't seen in a long time. At one point I was standing next to Tom Selleck and Al Pacino. And it's still Tom Selleck and Al Pacino and suddenly I'm 14 years old again. There's such good shows out right now. Breaking Bad is such a good, interesting show, and I love Modern Family. There's a lot of good television out there right now.