Famed musician Jeff Buckley's story is one that ends in tragedy, but the trailer for Greetings From Tim Buckley chooses to focus on a portion of his life before his untimely death. Penn Badgley plays Jeff in the drama that centers around the 1991 tribute concert he performed in to honor his father, folk singer Tim Buckley (Ben Rosenfield). Tim had passed away years before, due to a drug overdose, and though Jeff agrees to play the concert, he's not completely on board with the undertaking. Despite their physical similarities, Jeff doesn't want anything to do with the memory of his estranged father who he had only met twice. 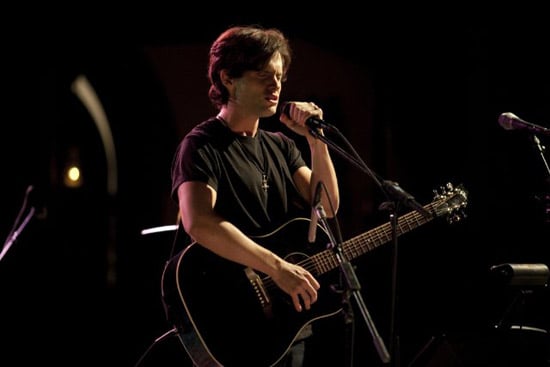 Badgley is best known for playing Dan on Gossip Girl and his portrayal of Jeff Buckley seems to be a step in the right direction toward meatier roles. I'm less interested in the obligatory romantic angle (courtesy of Imogen Poots, playing a concert intern), but what I do find impressive are the few moments from the concert at the end of the trailer. That is Badgley singing, and guess what? He's not bad. And that's saying a lot because Buckley's soulful vocals are hauntingly unique. Watch the trailer after the jump.

Entertainment News
Johnny Depp to Direct "Modigliani" Biopic, His First Return Behind the Camera in 25 Years
by Njera Perkins 17 hours ago