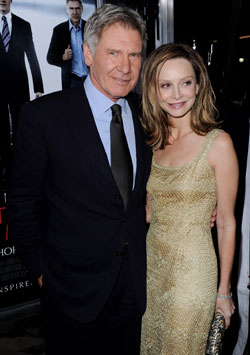 Harrison Ford and Calista Flockhart are husband and wife! TMZ confirms the two tied the knot on Tuesday in Santa Fe, during a small wedding officiated by Gov. Bill Richardson. The two were seen looking very loving at an event in LA last week, and it looks like they had a good reason for that glow as they prepared for their private ceremony.

Calista and Harrison have been together since 2001 and announced their engagement in March 2009. He has four children and three grandchildren from previous marriages and is also a parent to Calista's son, Liam. Congrats to the happy couple!