As you may have read, April's issue of Interview magazine holds a piece from several contributors including Michelle Williams, Naomi Watts, Phillip Seymour Hoffman, Sean Penn and Todd Haynes speaking about their memories of Heath Ledger. It's a moving and celebratory tribute, and so kind that those who knew him are sharing their memories with us. Here are a few excerpts: 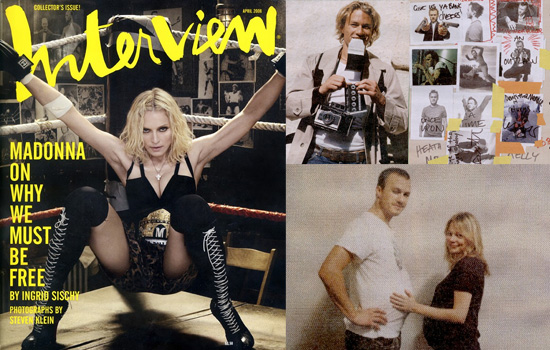 Ellen DeGeneres: He was good at anything he did. He and Michelle came over to our house once, and they were really late because he was directing a Ben Harper video. He was coming straight from that and he was telling us about it and how much he loved it. And then we played poker and he proceeded to take all of our money.

Naomi Watts: He was a huge, obsessive chess freak – and very, very good at it.

Philip Seymour Hoffman: When I think of him, I see him in a state of dance or something – this constant state of movement. It didn't seem like anxiety to me. It seemed like excitement.

Amy Pascal: He was always introducing you to 3,000 mates whose names you can't remember.

For more from his friends, coworkers and Michelle, just read more

Naomi Watts: His acting was so touching, so connected in truth. I think he was just getting started.

Todd Haynes: He seemed like he was on a different plane.

Sean Penn: His talent does speak volumes of the kind man, the loving father, and, in fact, the brilliant and gifted guy I really missed out on – that we all did in the long run.

There's so much more in the April issue of Interview magazine, out now. It really is a fascinating and touching read, bringing a little more colour to the character of the actor we knew of.