Samantha Burke has finally opened up about her relationship with Jude Law in an exclusive interview with Hello magazine. She shares the first pictures of five-week-old baby Sophia and talks about how she met Jude and why they broke up, confirms that Jude is yet to meet his daughter, and reveals Sophia is already taking after her father. Here are the highlights: 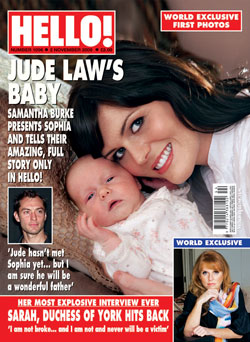 To find out why their relationship ended, how Sophia is showing signs of following her father's career, and Samantha's hopes for her future with Jude, read more.

I'll be interested to see how Jude responds to Samantha's words and the publication of the first picture of baby Sophia. What do you think of Samantha's interview?

Read the full interview in Hello! out now.