As she's proved time and time again, Meryl Streep is a pro. Just ask her cabinet of Oscars, Emmys, and Golden Globes. But in the new trailer for Hope Springs it appears her character Maeve has lost her touch, or at least she has with Arnold (Tommy Lee Jones), her hubby of 31 years. After concluding that their marriage has lost its spark, Maeve and Arnold head to Great Hope Springs for an intensive couples therapy retreat, led by Dr. Bernie Field (Steve Carell). Along the road to reconciliation, the two encounter roadblocks, hijinks, and a banana. 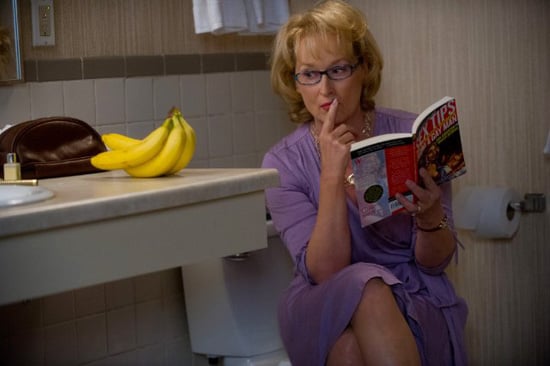 Many Meryl Streep fans might be excited about this movie, but if this trailer were a person, I would be like "TMI, man." I know Jones was hot back in the day, but I do not want to picture him having a threesome with Streep and their neighbor. Having said that, the non-sexy stuff does look pretty cute, and given that it's being directed by David Frankel, who was behind 2006's The Devil Wears Prada and 2008's Marley & Me, it might be one of the feel-good movies of the Summer. Hope Springs comes out August 10, so watch the preview after the jump.