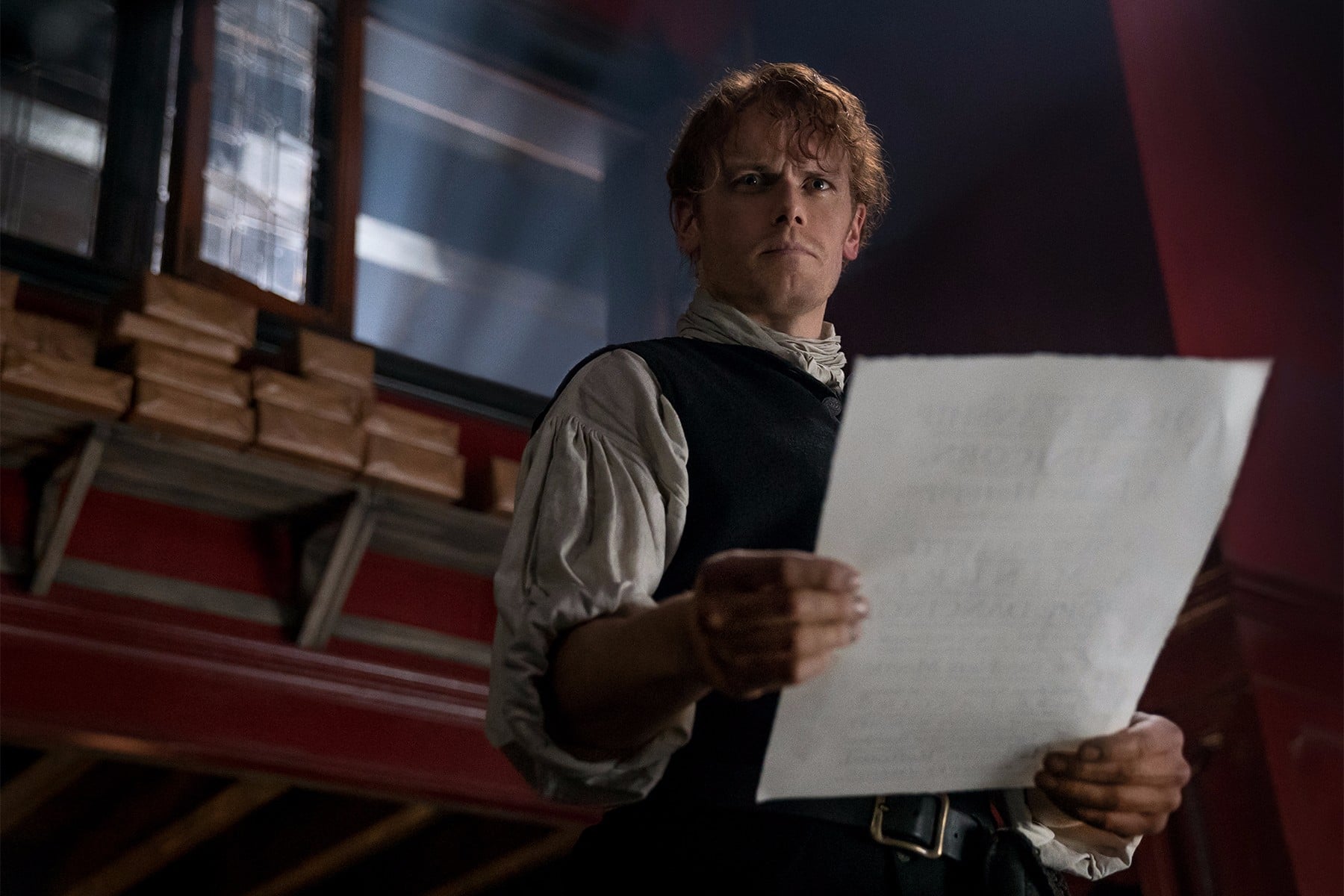 On Outlander, Jamie and Claire mature pretty steadily over the course of the entire series. Much like Claire, there's really no sign of his aging since the first episode of the series, save for lighter strands on his red head, some wrinkles, and those sexy bifocals (no, really). Played by Scottish actor Sam Heughan (who is 37 years old), Jamie's ageing process is meant to coincide, to a certain extent, with that of the actor so it doesn't look too superficial. Caitriona Balfe, who plays Claire on the show, explained why they don't use prosthetics to TVLine: "A lot of prosthetics can also be jarring and can take people out of the scene, and it cannot look perfect."

Related:
The 23 Hottest Pictures of Outlander's Sam Heughan We Could Find

When viewers meet Jamie for the first time in 1743 on Outlander, he's 23 years old and living with his uncles and the Mackenzie clan because there's an arrest warrant out for him by the English Redcoats — Black Jack Randall specifically. While still pretty young, he's lost his mother, been whipped nearly to death by Black Jack — the scars of which are heavily spread over his back — and lost his father to a heart attack when he witnessed Jamie in such pain. 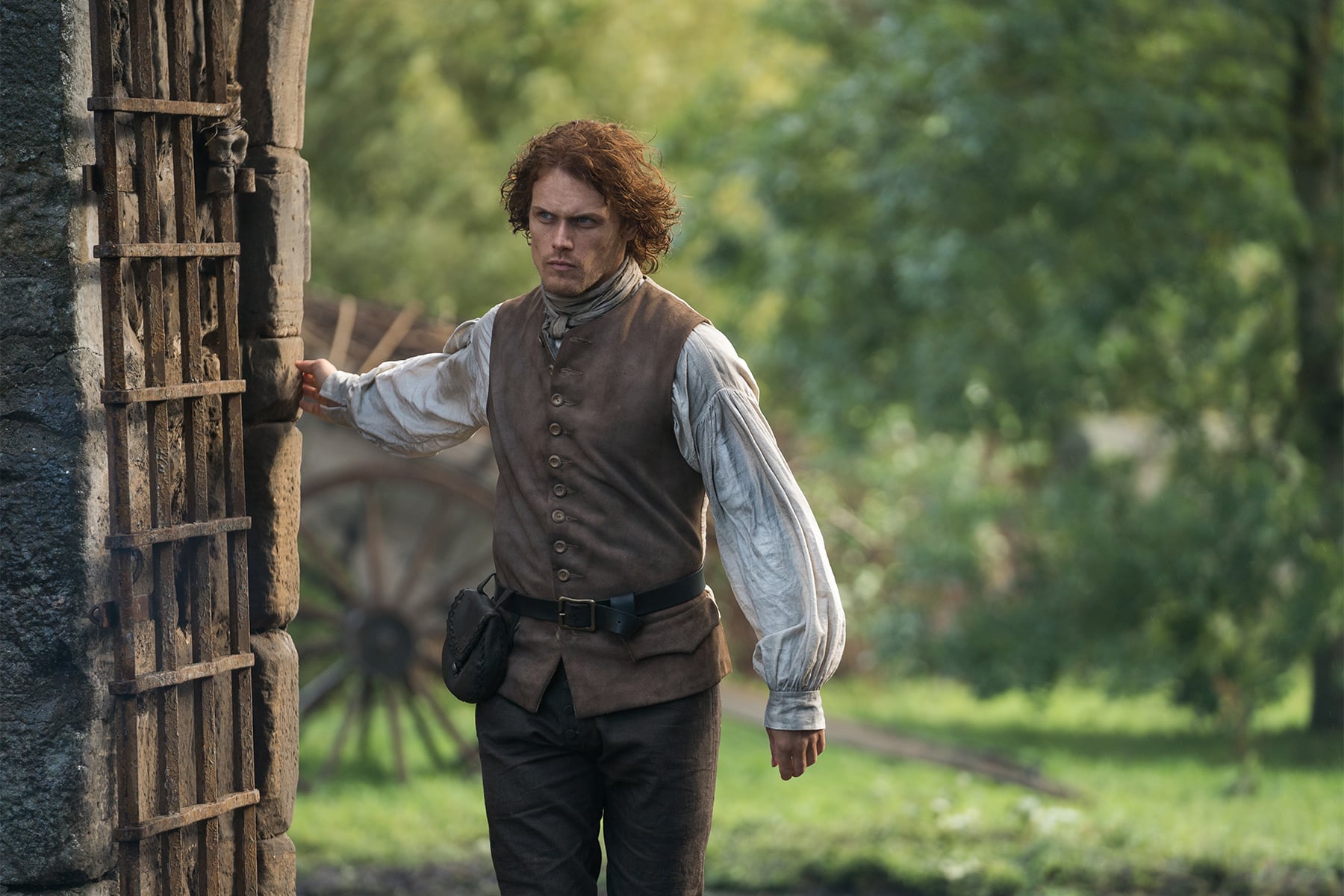 By Dragonfly in Amber and the show's second season, when he's in Paris and later forced by Bonnie Prince Charlie to join him in the Scottish Rebellion against the English, he's only about 25 years old. Admittedly, it's hard to believe, considering all that he's faced in those few years in between, from being tortured by Black Jack at Wentworth to losing a child.

When Claire meets Jamie again in Voyager in 1765, he's about 45 years old, more of a slightly blonder fox than silver, but in the season three finale, Claire mentions seeing a few scattered here and there. 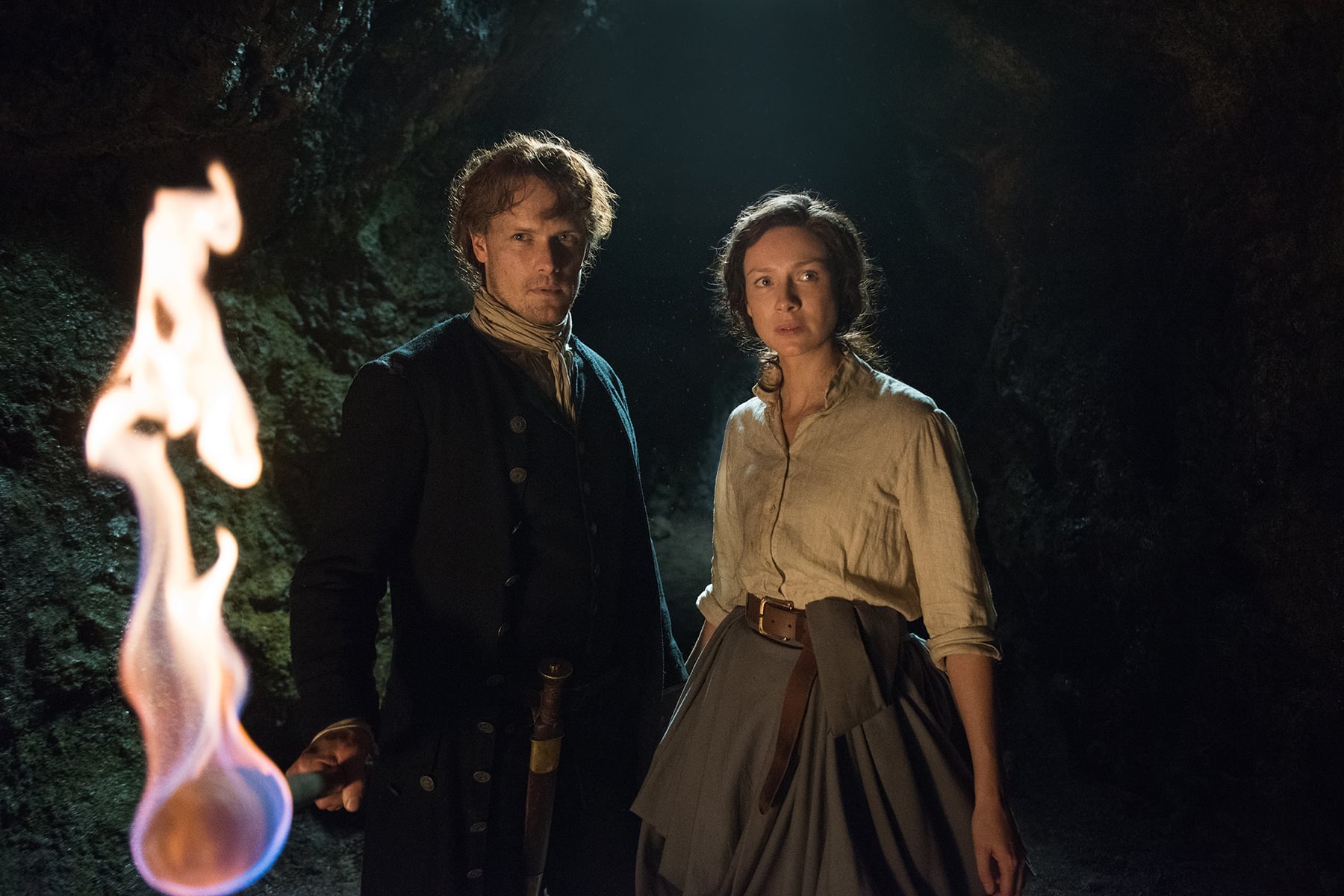 With all that they both went through in trying to find young Ian, we can't say we're surprised. His scars, though ever-present, will continue to be coloured a little lighter as the years pass. Wendy Kemp Forbes, who is Heughan's makeup artist on set, explained to Entertainment Weekly, "There was talk about changing the shape of the scars after 20 years, but we decided against that. We just keep colouring it lighter so the scars don't look as red as they were 20 years previously."

With each season dedicated to each book in the series, the fourth season will encompass Drums of Autumn, which opens up in 1767 in the colonies. At that point, only two years have passed since Jamie and Claire's reunion, so there may not be big differences in Jamie's physical features. But by the fifth, sixth, seventh, and eighth books, viewers may gradually begin to see Jamie's character on the show with visible grey hairs and his body beginning to wear under the harsh conditions he constantly has to endure. In Written in My Own Heart's Blood, the eighth book in the series, he'll be going into his late 50s. For the average 50-something-year-old, fighting in the American Revolution against the British, constantly rescuing his family members, and battling enemies left and right may not be easy feats, but there must be something in the 18th century water, because Jamie and Claire still continue to fight against all odds and come out on the other side victorious.

One thing is certain: James Alexander Malcolm Mackenzie Fraser is going to age verra well in the coming seasons.