There were Brits out in force at New York Fashion Week this weekend as the shows and parties really kicked into gear! Alexa Chung tried to cheer up a sullen looking Taylor Momsen as they hung out backstage at Bryant Park, while Taylor's Gossip Girl costars Blake Lively and Jessica Szohr were spotted at the shows. A newly dark haired Agyness Deyn reflected the grungy goth look of a lot of the guests, as she partied at the Alexander Wang bash alongside fellow guests Mischa Barton and Kirsten Dunst. Pixie and Peaches Geldof also showed up at a couple of events seeming almost as inseparable as Amanda Bynes and Hilary Duff over the weekend. It wasn't just girls though, Jared Leto, Mark Ronson, Corbin Bleu and Bruce Willis were among the men in attendance! 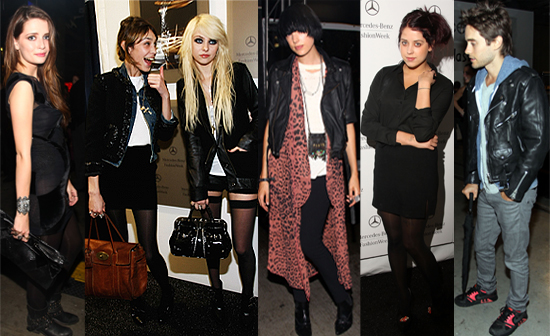