Henry Cavill was announced as the new Superman just two months ago, but at WonderCon today, it quickly became apparent that the handsome hero already has a following. Cavill took the stage along with Luke Evans and Isabel Lucas, director Tarsem Singh (The Cell, The Fall), and producer Mark Canton (300) to present never-before-seen footage from their upcoming mythology action flick, Immortals. Freida Pinto, Mickey Rourke, and Kellan Lutz also star, though they were unable to attend (Lutz unfortunately missed his flight after a Breaking Dawn shoot went until 6 a.m. this morning!). 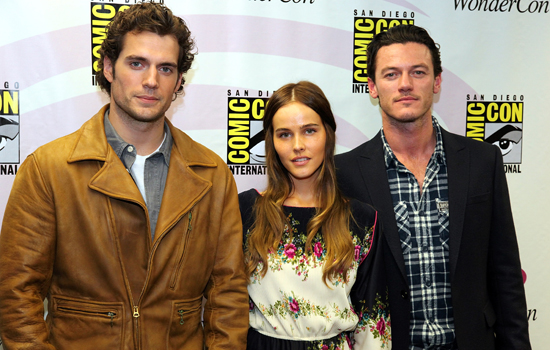 The movie tells the story of the Greek Perseus, a warrior who gets handpicked by Zeus (Evans) to save humankind from evil King Hyperion (Mickey Rourke). Lutz plays Poseidon, Lucas steps in as Athena, and Pinto costars as Perseus's love interest. But even though the stars were at WonderCon to talk about their new action project, Superman was a very hot topic.

For more on the film, plus what Cavill had to say about Superman, read more.