Jessica Chastain is a fresh face in Hollywood, but she's already worked with the likes of Helen Mirren, Ben Affleck, and, in The Tree of Life, Brad Pitt. Her and Brad's film, which opens Friday, just won the Palm d'Or award at the Cannes Film Festival. We chatted with Jessica just before The Tree of Life's LA premiere yesterday. Jessica clearly likes to take risks in her life and work — in fact, she arrived for our interview with a leg cast, which she said was the result of a motocross accident! During our interview, she reflected on her first time at Cannes, emotional and unexpected scenes with Brad, and her take on the movie's message. Here are highlights: 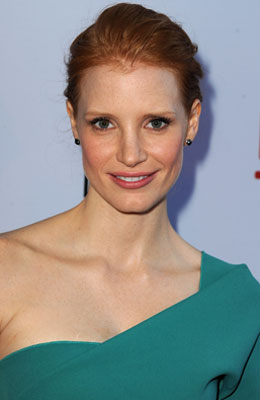 PopSugar: So, obviously, the first question is what happened [to your leg]?
Jessica Chastain: This sounds so idiotic. I got in a motocross accident yesterday. I thought it would be fun, and I really liked it, and I went way too fast. I shouldn’t have done it, especially having a premiere today. I spent the afternoon in the emergency room yesterday, because the bike fell on me and twisted my leg. Those things are heavy! It’s funny, because I was lying there, and my knee snapped. I heard this popping noise. . . so the wheels kept going and I’m pinned underneath it, and I thought, oh someone will come get me. It just felt like forever, so finally I just went, "Help! Help!" It was really, really silly.

PS: So now you'll have crutches down the red carpet tonight?
JC: Yes, but not for photos. . . I balance really well, so I’m going to stand still in very high heels and pass off my crutches, and I’ll take my pictures. There won’t be any of that walking, talking, fancy red carpet stuff, or they will have pictures of me on the carpet, lying on it. I hope I don’t fall! Oh god. I was worried about falling down the stairs at Cannes.

PS: Can you talk about what the Cannes experience was like?
JC: Yeah, it was great. I realize it’s never going to be matched. Realistically, I mean . . . it’s not really a good example of a typical time at Cannes, because I’ve got two films that both won the top prize in their category. Tree of Life won the Palm d’Or and Take Shelter won the grand prize in critics’ week. And then I also had a film there, The Wettest County, which there was a bidding war [over] and Harvey Weinstein bought it. So it was like all of this great stuff was happening, and I don’t think that’s a typical Cannes. But it’s OK, because I’m enjoying every second, knowing it will never repeated again.

To read more from Jessica on getting emotional with Brad Pitt and her hopes for the movie, just read more!

PS: You character is seen almost exclusively from the perspective of her boys. When you were acting, did you think of yourself [from that perspective]?
JC: When I read the script, I realized that she basically is the embodiment of grace and the spirit world. And then I thought, OK, I also have make her a real person. I had to ground her, and the only way I could think of grounding her was her love for her children. And this bond she has with her children is very important, so I had to make that incredibly real. And it actually was very real. The boys and I, to this day, we’re actually still very close. I got a Mother’s Day gift from Hunter last year, I get phone calls. . . . When the film ended, I was more heartbroken than anything that the kids went back to their mothers. I was like, 'I love the kids!'

PS: How was it different with Brad? What kind of conversations did you have about building that familial closeness with your characters?
JC: We didn’t really have those conversations a lot, because the one thing about Brad and my character is that there is this distance, where she’s constantly trying to reach out to him to have him open up to the family and to love. And he’s [like], "No, I’ve gotta always stay on guard, and it's survival of the fittest, and I’ve got to be the strong one." So in a way, if we’d had these bonding experiences like we had with the children, it would have made our jobs harder. But on set, the great thing about him is he could play that character and then soon as the roll was out, he was fun, nice, sweet Brad, throwing the football with the boys out in the yard, and asking me, "What kind of music do you like? That’s one thing I’m out of touch with right now is music." He’s a normal guy.

PS: What about the emotional tussle you have in the house? Did you prepare for that at all?
JC:We didn’t even know that was going to happen, to be honest. It was after we filmed the scene were he attacks the boy. I know for my character, she had to clean up the house, but she’s still vibrating from what happened and trying to contain it. We shot for four minutes, going back and forth, cleaning dishes, doing all this stuff. And at one point, I don’t know why or what on earth possessed me, but I grabbed the pepper and rubbed it in his face and said, "How do you like it?" And then he grabbed me, and all of a sudden, we’re fighting and struggling. So working with Brad, an actor who is open to being spontaneous and emotional and inventive and really listens to the other person, you can have moments like that. When someone comes in and they plan what they’re going to do, you don’t get those accidents.

PS: What do you think the audience reaction will be like to this film?
JC:You know, I think there probably will be a lot of mixed reaction, and I hope that it's going to create a lot of discussion, because a lot of my favorite films are the kind that I go, "Oh, I love that film," and someone else goes, "Really!?" I love those movies and I really hope that's the case. I feel like this film asks more questions than it answers. And a lot of us are used to being given answers and we just want to be entertained. This film really isn't that. It really isn't "I just want to turn off. I've had a hard day at work, I'm just going to go turn off and watch The Tree of Life." [Laughs.] It's not that. So I think you absolutely have to be in the mindset to be open and then to examine your life.