Robert Pattinson is back in Los Angeles ahead of New Moon's premiere tonight, bringing his promotional tour of Europe to a close. I was lucky enough to meet Robert, Kristen and Taylor when they visited London, and Rob looked gorgeous in a white shirt and suit, which he later wore to the UK fan event. I've already brought you Rob and Kristen's response to questions about their relationship, as well as the pair's revelations about their kissing scenes, and now I've got the lowdown on Rob's future music plans, what he thinks about immortality versus ageing, and the differences between working on Harry Potter and Twilight: 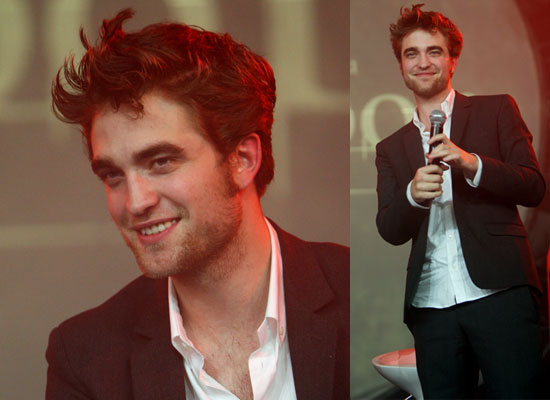 There's still lots to come from all three stars, but for now, to find out what Robert had to say about immortality and the differences between Harry Potter and Twilight, read more.

Rob's clearly an intelligent and funny guy. Check out video footage of Robert at the UK press conference, and watch his interview with Molly too. Stay tuned for my next installment of cast interviews, where Taylor reveals all about stunt work, hobbies and getting into Bella's mind!