I was lucky enough to meet Taylor Lautner, Robert Pattinson and Kristen Stewart yesterday at the New Moon press conference ahead of the UK fan event last night. The trio revealed lots of backstage gossip from the set, and opened up about their personal lives too. Taylor talked about his daredevil approach to doing his own stunts, Robert spoke about his music and the differences between working on the Twilight and Harry Potter franchises, and Kristen dealt with questions about her relationship with Rob by talking about getting to a higher level with actors she works with. All that's still to come, but for now read all about how Taylor and Robert got their hot bodies for shirtless scenes, and what Kristen had to say about kissing Robert. 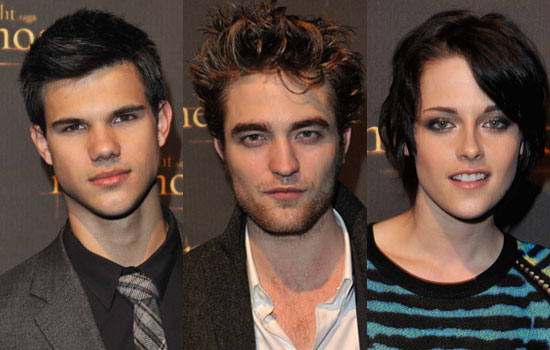 To find out what Kristen said about kissing Robert, and how Robert got his hot body for all the shirtless scenes in New Moon, just read more.