This is what happens when Riva Marker (the badass president of NineStories) and I invite #CaryJojiFukunaga to rehearsals for our new Broadway musical. Check out this video we made! #SundayintheParkWithGeorge

Jake Gyllenhaal is one incredibly talented young man. Sure, he's a great actor, but he's also got some killer pipes. On Tuesday, he gave us a quick glimpse of his upcoming stint in the revival of the Broadway musical, Sunday in the Park With George, when he posted a clip of him singing "Finishing the Hat," directed by True Detective's Cary Fukunaga. Not only does he look incredibly attractive as he waltzes down the staircase during the number, but his voice sounds like a straight-up Disney prince. Needless to say, we're already booking our tickets to NYC to see the show. See you at the stage door, Jake! 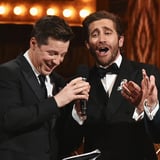