Welcome to the Rileys comes out in the US at the end of the month and Kristen Stewart kicked off her promotional tour with a stop off at The Tonight Show last Friday. Her director, Jake Scott, recently talked about working with the young actress and made some interesting word choices to describe working with Kristen. He said: 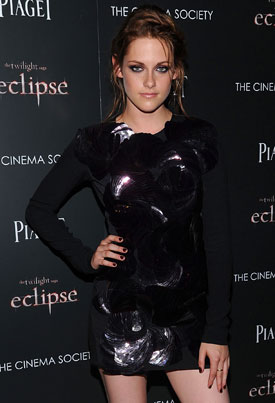 "She's very vulpine—very wolfish—and wily, kind of twitchy. Directing her is kind of like wrangling a herd of cats."

Kristen is famous for her mannerisms both in her real life and playing the body language of her Twilight character, Bella Swan. In WTTR she plays a teenage stripper, another character who can come off as uncomfortable in her own skin. Still, describing her as a "herd of cats" can be taken as a bit of a cut at her acting abilities. Kristen fans will have to wait until the film's release on Oct. 27 to see her "unpredictable" character but tell us, what do you think of Jake's comparison of Kristen's acting to "wrangling a herd of cats" — he meant it as a compliment or a cut down?