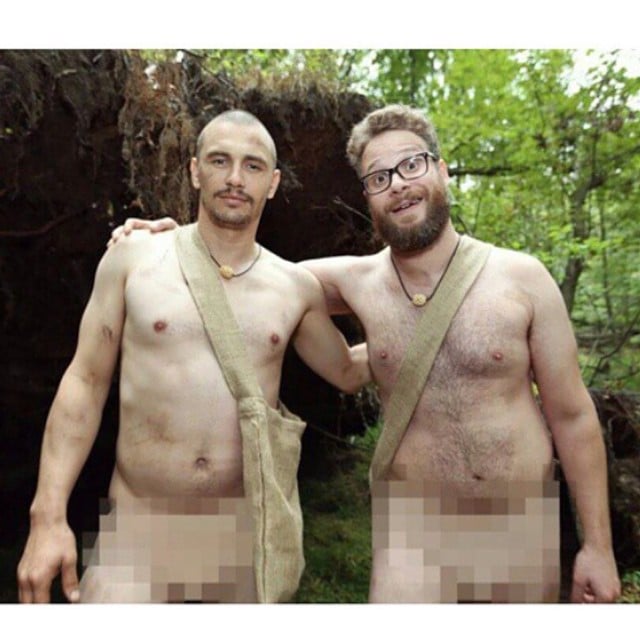 James Franco and Seth Rogen are remaining coy about an upcoming mystery project, but they're definitely not holding back on the visuals. In a series of pictures James posted on Instagram this week, the BFFs and frequent collaborators explore the woods in the buff. One of the snaps shows the guys wrapping their arms around each other in front of a tree with nothing but burlap messenger bags draped on their bodies. "Boom boom, NAKED and Afraid. Me and Seth, in the bush, naked, together. For reals," James captioned the picture. The rest of the shots are equally hilarious, and the accompanying captions also incorporate the "Naked and Afraid" theme, suggesting that just might be the title of whatever they're working on together.

This isn't the first time the guys have caught our attention with their shirtless shenanigans. In September, James and Seth disrobed on The Tonight Show Starring Jimmy Fallon as part of Jimmy Fallon's surprise birthday spectacle, and late last year, their ridiculous and hilarious parody of Kim Kardashian and Kanye West's "Bound 2" music video went viral. Scroll through to get teased by James and Seth yet again.

Celebrity Instagrams
Gwen Stefani and Blake Shelton May Be an Unlikely Pair, but Their PDA Speaks Volumes
by Britt Stephens 14 hours ago