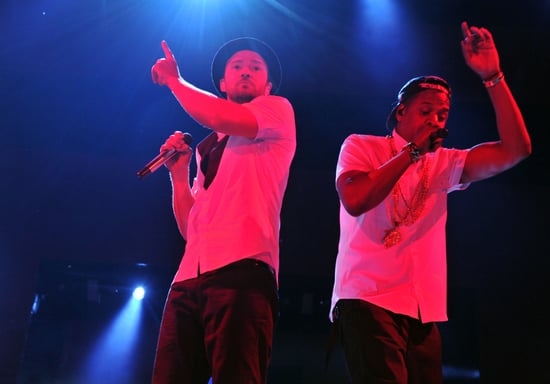 Jay Z took to social media today to debut the official music video for his new single, "Holy Grail," which features Justin Timberlake. The rapper made a bit of social media history with the launch, as he became the first major music star to premiere a video via Facebook. The clip is set in an abandoned, gothic-style mansion and shows Jay Z and Justin performing a slightly slower, chopped remix of the song amid ghostly dancers covered by sheets, chalices of blood, and a car that gets set ablaze. And speaking of hotness, we couldn't help but notice how handsome the duo looks in their all-black ensembles and thick gold chains.

Jay seems to be continuing his strategy of using TV and social media to promote the Magna Carta Holy Grail album since its July release. He partnered with Samsung to make the album available exclusively for their phone users with an app on Independence Day, and broke his infamous Twitter silence to chat it up with fans ahead of the full MCHG release later that month. Jay Z also made headlines when he debuted his documentary-style "Picasso Baby" video on HBO in early August.

Image Source: Getty
Jay Z Debuts His New Music Video Via Facebook, and We Really "Like" It  originally posted on POPSUGAR Celebrity News
Around The Web