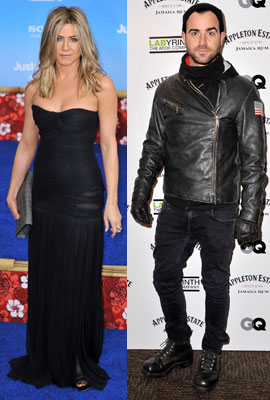 Jennifer Aniston earned the distinction of being ranked Spike TV's Sexiest Star of the Decade, and she may have used those good looks to make another love connection. Reports now link Jennifer Aniston to actor Justin Theroux, after they were spotted sharing a dinner recently in LA. Jennifer makes headlines regularly with her male dining companions, and Justin was romantic with NYC-based stylist Heidi Bivens.

Justin and Jennifer have apparently been friends for a while and recently filmed Wanderlust in the Big Apple. He also, interestingly, is the only actor who ever appeared as two different characters on Sex and the City. It remains to be seen if he and Jennifer have a true love connection, but now Justin's earned a place on the love list of her admirers that has lately included Bradley Cooper and Jason Sudeikis.