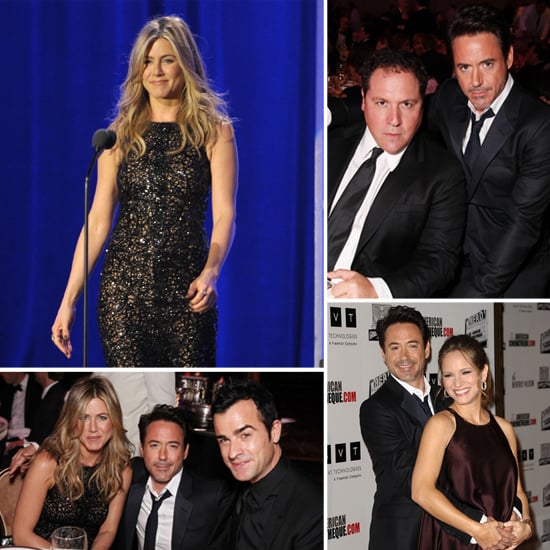 Jennifer Aniston Wears a Sexy LBD For a Night Out With Justin Theroux and Robert Downey Jr.

Jennifer Aniston joined actors Jack Black, Michael Douglas, Jon Favreau, and more at the American Cinematheque Awards in LA last night to honor her friend and fellow thespian Robert Downey Jr. Jennifer took the stage in a sexy, form-fitting gown to say a few kind words about her long-time friend RDJ. Jennifer joked, "[Robert] never let his career get in the way of his commitment to hard-core, classic Grade A drugs." Justin Theroux, who dined next to Jen at the event, also shares a connection to Robert, having penned the scripts for Tropic Thunder and Iron Man 2. Robert stopped by Jen and Justin's table to pose for a photo, but RDJ also stuck beside his wife and mom-to-be, Susan Downey. It's been an exciting week for Robert. In addition to last night's party, the first trailer for The Avengers was released.