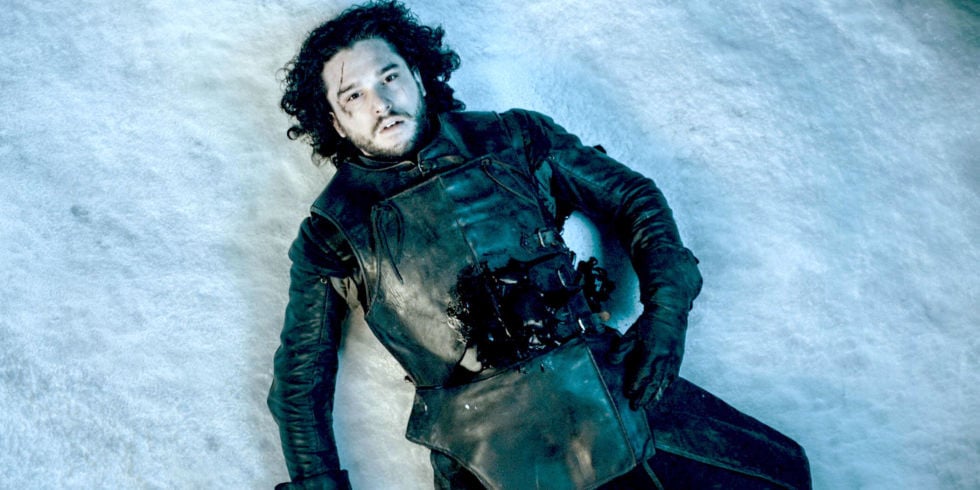 Spoilers for the season premiere below!

Game of Thrones is back! The sixth season premiered last night, and as usual, it left us with more questions than it answered. Still, it managed to somewhat resolve the biggest cliffhanger from season five: is Jon Snow really dead? Yes. Like, really, really dead.

The episode, "The Red Woman," opens with Jon's lifeless body lying motionless in a pool of his own blood in the snow inside Castle Black, with a sign reading "traitor" nailed to a post beside him. Luckily, Ser Davos and other loyal members of the Night's Watch soon discover the treachery committed by Alliser Thorne, Bowen Marsh, Olly, and other officers and bring his body inside. Melisandre joins them and takes a thoughtful look at his very, very dead body. It kind of seems like there's a glint of "I'm totally going to resurrect this dude" in her eyes, so for the sake of seeing Jon's gorgeous face alive once again, let's hope.

Meanwhile, Alliser and the rest of his mutinous crew gather everyone else in the Night's Watch to let them know about the casual stabbing they committed ("You all know why you're here. Jon Snow is dead.") and convince everyone that it had to be done. The group then heads to where Davos and Co. are cooped up and tells him to hand over Jon's body and "surrender by nightfall, or this ends with blood." Will Jon be resurrected in some way? Will he warg into Ghost, like some fans suspect? Will someone please kill Alliser Thorne and put us all out of our misery? We'll just have to wait and see.