Jordan continued her book signing tour with a stop in Cardiff on Saturday. Judging by the clothes though, it looks like the model wanted to present herself as Katie Price rather than Jordan. Wearing a decidedly more low-key outfit than those superhero threads, she looked almost demure — "almost" beacause the camera bulbs revealed what looked suspiciously like a white bra under that cosy black top. Honestly Jordan, we wouldn't expect such a schoolboy error from someone as skilled at posing as you. Still, it is a good way to grab the headlines without having to strip off. 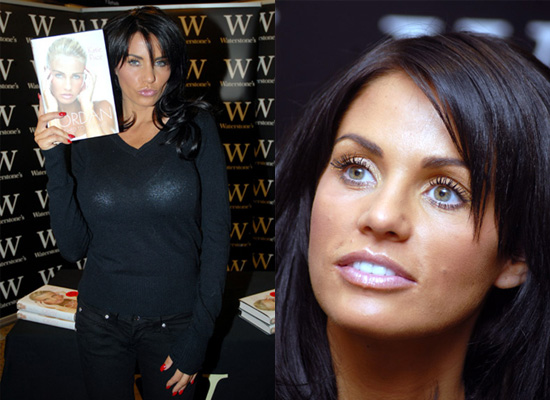 Over the last week we've seen Jordan in innocent pink and blue pastels, daring red and white stripes, and now in this covered-up black number. We'd love to know what kind of look you prefer. Maybe Jordan will stop by our site, read your comments and take note for the rest of her publicity tour. We can but hope...