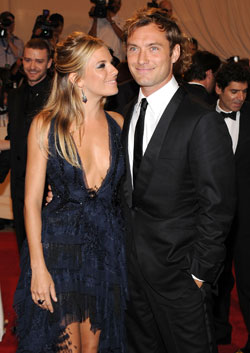 Oh no! Jude Law and Sienna Miller have broken up again. Jude's rep released a statement about the news, saying, "I can confirm that Jude Law and Sienna Miller are no longer in a relationship." The two reunited in late 2009 and first stepped out as an officially on-again couple at the Costume Institute Gala last May. Since then the two have been on countless bikini and exotic vacations, including a New Year's getaway in Africa last month. The two also reportedly bought a house together amid rumors of a potential wedding in the works. The two first got engaged in 2004 and then split in 2006. Unfortunately the two couldn't make it work this time either.