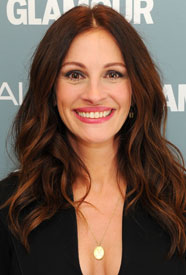 Julia Roberts may be famous for that toothy smile, but she's going to have to channel her dark side for her next role. As expected, the actress is set to play the villainous queen in The Brothers Grimm: Snow White. (Just to keep you confused, this is a separate film from Snow White and the Huntsman, which has Kristen Stewart and Charlize Theron in talks). No word yet on who will join her as Snow White and co., but can you see Roberts as an evil-doer?