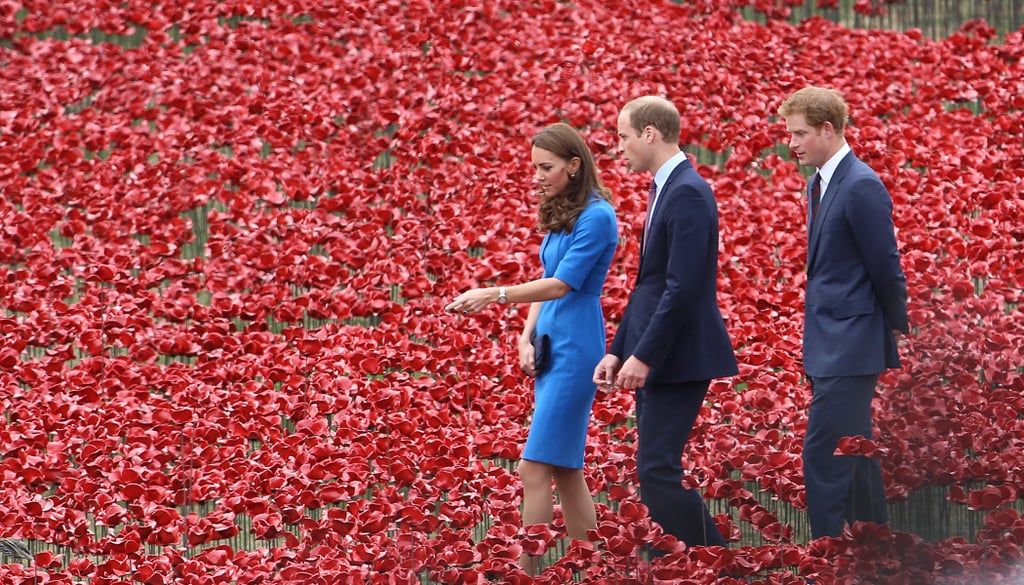 The Duke and Duchess of Cambridge reunited with Prince Harry on Tuesday, this time back on familiar territory. The group of young royals visited the Tower of London's "Blood Swept Lands and Seas of Red" installation in the Tower's moat, which was created to commemorate the 100th anniversary of the beginning of World War I. It will eventually hold 888,246 ceramic red poppies, each representing every British and British colonial loss of life during the Great War. On Monday, The Duchess of Cambridge, Prince William, and Harry were also busy with marking the special anniversary, with Kate and Wills attending Le Memorial Interallie in Liege, Belgium, alongside Belgium's Queen Mathilde and King Philippe and French President Francois Hollande. Harry was on his own earlier in the day when he stopped by an unveiling of a memorial in Folkestone, England, but he later met up with his brother and sister-in-law in Belgium to visit the St. Symphorien Military Cemetery.

While the royal family is busy with duties surrounding World War I, they will soon break from their work for a Summer holiday. Most of the family usually travels to Balmoral Castle to unwind for the month of August. Kate, Will, and son George are expected to make a stop by the estate for riding, hunting, fishing, and general relaxing. However, the royals' September schedules are already filling up, with Kate planning on making her first solo royal tour to Malta on Sept. 20 (no word yet on if George will join her). Meanwhile, Harry is hard at work preparing for the launch of his Invictus Games, which will take place from Sept. 10-14. The Games are a big deal to Harry, as they are aimed at supporting and showcasing wounded servicemen and women. Harry said he got the idea after visiting the Warrior Games in the United States back in 2013.