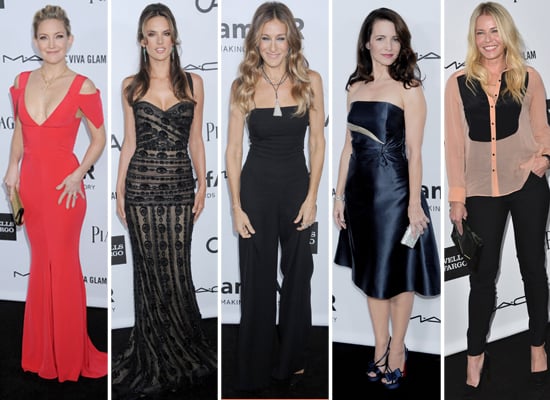 Kate Hudson paired a messy ponytail with a red Prabal Gurung gown at last night's amfAR Inspiration Gala, which was held at Milk Studios. Sarah Jessica Parker, who posed in Chanel on the carpet with Kenneth Cole and agent Kevin Huvane, had a fun Sex and the City reunion, meeting up with the pal Kristin Davis too. Alessandra Ambrosio broke from prepping for the upcoming Victoria's Secret show to don an embellished Zuhair Murad gown, while Chelsea Handler opted to go a bit more casual in pants and a loose top. The event, which featured dinner, an auction, and a performance from Katy Perry, was held to honor Kevin, who works with SJP and many other top Hollywood stars. Chelsea presided over the event as host — check back soon for pictures from inside!