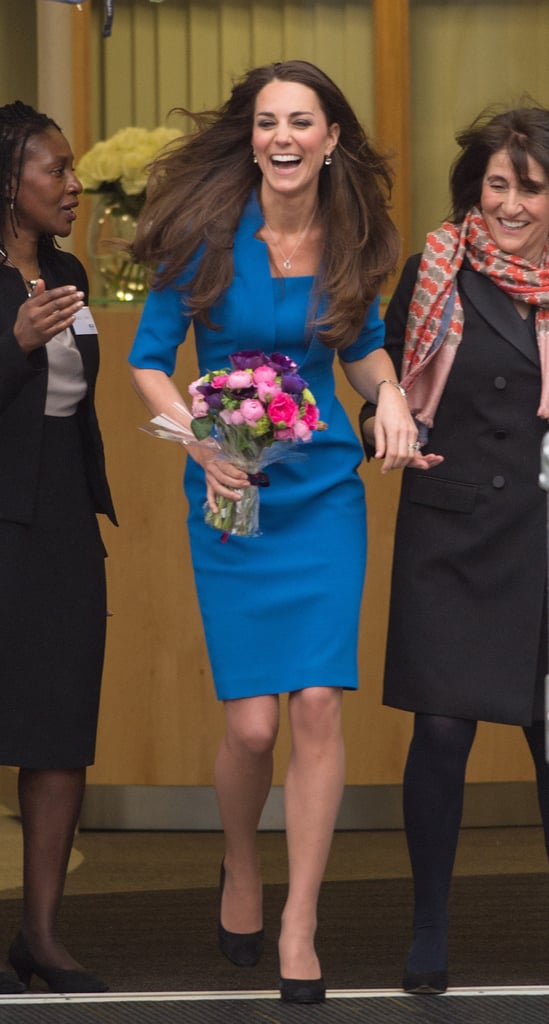 Kate Middleton swapped her gowns for a smart blue LK Bennett dress when she visited Northolt High School in London on Friday to official open the ICAP Art Room. The Duchess of Cambridge, who also wore a Cartier watch, has been a patron of the Art Room, a charity that provides art therapy to children and teenagers, since 2012. Earlier this week, Kate cut a very glamorous figure when she wore a navy blue Jenny Pakham gown to the National Portrait Gallery's annual The Portrait Gala in London. She made headlines for not only recycling her beautiful frock (she had previously worn it to a gala in October) but also for breaking out her grandmother-in-law's jewels as she wore the queen's Nizam of Hyderabad Cartier necklace. The bauble was given to the queen by the Nizam (hence the name) for her 1947 wedding to the Duke of Edinburgh.

While Kate, like many people around the world, was hard at work on Valentine's Day, there were no details on what she and Prince William had planned for later that day. William was also busy with his own royal work on Friday, as he teamed up with Prince Harry to help with flood relief efforts in Berkshire. The two princes, who were joining with their colleagues from the Armed Forces, poked fun of the media during their visit, with William telling reporters to put down their cameras and "come help" with supplying sandbags. The duke is currently taking an intensive agriculture course at the University of Cambridge to prepare him for when he takes over the Duchy of Cornwall from his father, Prince Charles. On Thursday, William, Charles, and Harry teamed up in London to attend a press conference about illegal wildlife hunting, a cause close to the royals' hearts.

Kate and William's Valentine's Day plans may still be under wraps, but there is still time to vote for them for our best celebrity power couple!