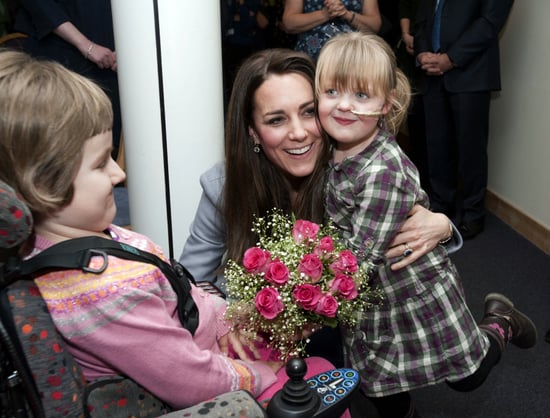 Kate Middleton and Prince William were back to their royal work after having an unexpectedly somber night out. The Duchess of Cambridge wore a gray Reiss coat, skinny jeans, and wedge ankle boots when she visited the Shooting Star House Children's Hospice in Hampton, England, on Friday. She sat with a group of children as they sang songs as part of a group therapy session (above) and even took over puppet duty with a green frog. She also chatted with parents and revealed that Prince George was recently introduced to "messy play." Kate is a royal patron of East Anglia Children's Hospices and recorded her first PSA in April as part of Children's Hospice Week. Meanwhile, the Duke of Cambridge traveled to Aldershot to present medals to soldiers from the 1st Battalion Irish Guards who had served in Afghanistan.

On Thursday night, the royal couple attended the UK premiere of Mandela: Long Walk to Freedom in London. The bash took a rather sad turn toward the end of the screening when it was revealed that Nelson Mandela had passed away during the premiere. (He was not present at the event, but his daughter Zindzi Mandela was one of the guests of honor.) The duke and duchess were notified of Nelson's death just a few minutes before the end of the film, and William said a few words about the South African leader, calling him "an extraordinary man."

Keep reading for more photos from Will and Kate's separate appearances.

A very special music therapy @SSChospices ... Can you spot our royal visitor joining in with the sing-a-long? pic.twitter.com/FSvQtUym1h