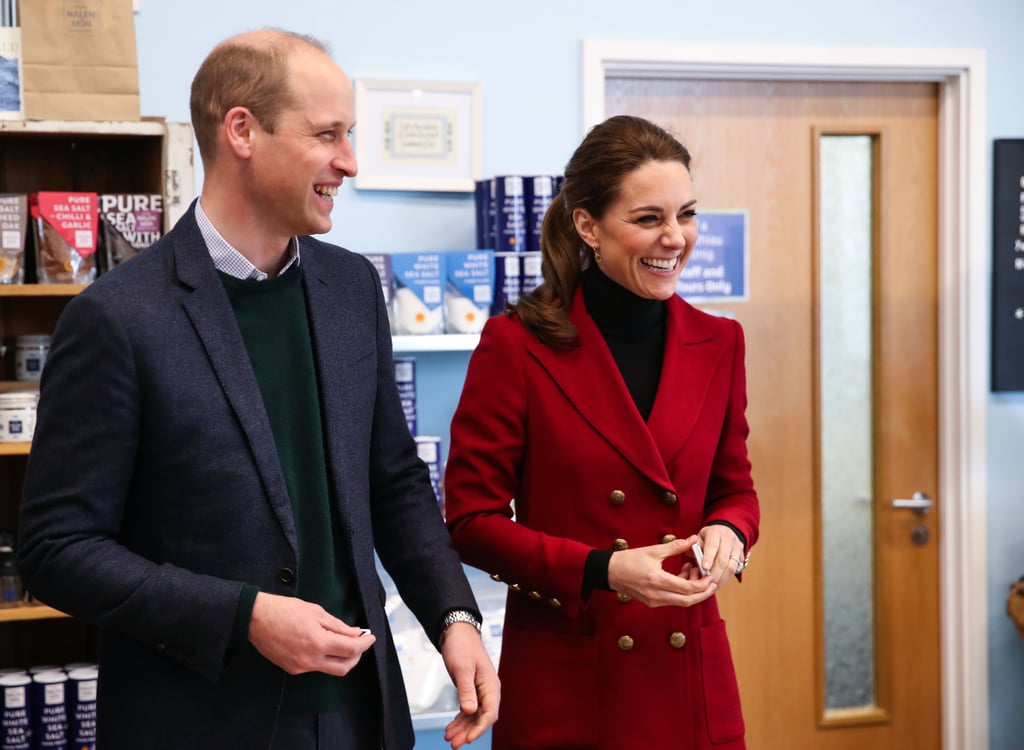 Kate Middleton and Prince William took a trip to North Wales on May 8 around the same time that their nephew, Meghan Markle and Prince Harry's new baby boy, Archie, made his first public appearance. Kate rocked a red double-breasted blazer over a black turtleneck with jeans, and William sported a navy blazer over a green sweater with jeans. During the visit, they stopped by the Caernarfon Coastguard Search and Rescue Helicopter Base, where William used to work as a Royal Air Force search-and-rescue pilot from 2010 to 2013. They also toured the Coastguard's new Sikorsky S92 helicopters, spoke to staff members, and met volunteers from the Wales Air Ambulance. Additionally, they visited local business Halen Mon Anglesey Sea Salt and learned about how the company makes its salt from hand harvesting to packageing.

But the fun certainly didn't stop there! The Duke and Duchess of Cambridge then travelled to Newborough Beach, where they explored the shore with young members of the Menai Bridge Scouts. They also made a quick wardrobe change, opting to bundle up in warm jackets, and helped clean up the beach while admiring some of the wildlife.

The North Wales trip comes just a day after the royal duo attended the launch of The King's Cup Regatta in London. While there, Will and Kate spoke about Meghan and Harry's new bundle of joy. "I'm very pleased to welcome my brother to the sleep deprivation society that is parenting!" William quipped. Kate also shared her enthusiasm for the first-time parents, adding, "It's really exciting for both of them. These next few weeks, it's always very daunting first time around, so wish them all the best." Since Kate and William already have three little ones of their own — Prince George, 5, Princess Charlotte, 4, and Prince Louis, 1 — we're sure they'll give the Duke and Duchess of Sussex some solid parenting advice!

Related:
The Duke and Duchess of Cambridge's Most Precious Moments With Kids
Previous Next Start Slideshow
The RoyalsThe British RoyalsPrince WilliamKate Middleton