Kate Moss belatedly celebrated her birthday last night at London's Shoreditch House with Jamie Hince and pals like Sadie Frost. She arrived home in a cab at 2am, and was wearing a ring on the middle finger of her left hand. Following claims Jamie proposed to Kate on her birthday, reports then suggested Jamie did give Kate a ring but it wasn't an engagement ring, while other rumours suggest Jamie did ask Kate to marry him and is waiting for her answer. Kate was spotted at a jewellers in London yesterday, with no sign of any rings on her left hand, but by last night she was rocking a new rock. Whether Kate's now wearing Jamie's ring or a diamond she bought herself, the couple still look happy as ever. 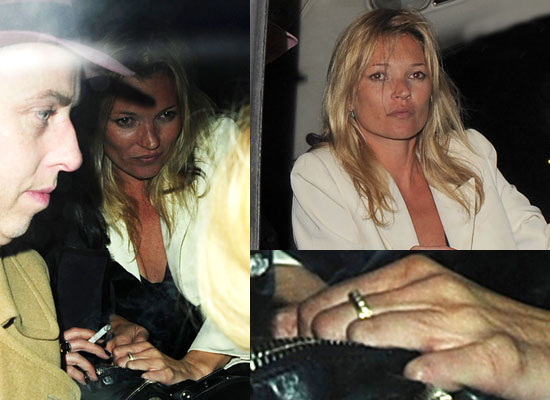 To see more pictures of Kate at the jewellers and at her party, just read more.