Kate Moss and Jamie Hince stepped out in London over the weekend to visit a friend and see Slumdog Millionaire at the cinema, with Kate sporting a trilby hat and carrying a large Agent Provocateur bag. Following her popular appearance in the lingerie company's adverts, she's apparently asked director Mike Figgis to help her make her break in Hollywood so that she can become an actress. Perhaps being excluded from last year's FHM Sexiest Women poll has worried her — at six months pregnant, lovely TV presenter Kirstie Allsopp was included on the list and said: "My hairdresser couldn't get over it. He kept saying, 'But they missed out Kate Moss and included you!' And he wasn't trying to be flattering either." Either way, it's obvious Kate's still got the look. 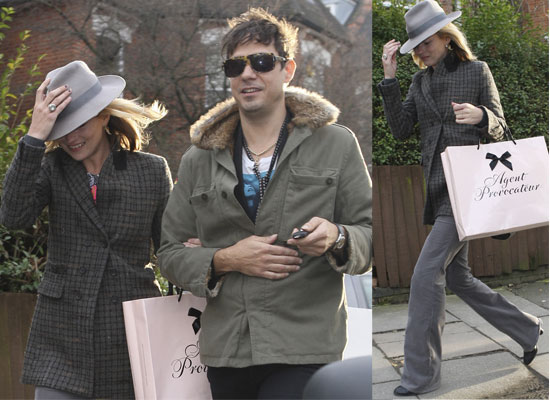 To see more of Jamie and Kate out in London, just read more