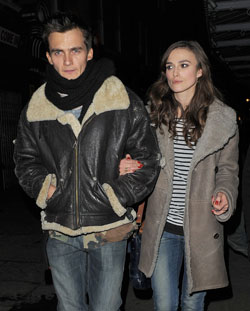 Keira Knightley and Rupert Friend have ended their five-year relationship, her father has confirmed. He said Keria is now focused on her work, which includes an extended stint on stage in The Children's Hour.

There were rumours of a breakup just before Christmas, and the couple made the mutual decision to split in December. Keira's comments in an interview about her character's boyfriend issues sparked reports of relationship problems the previous December.