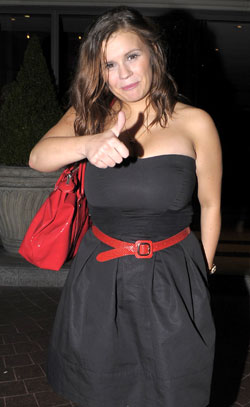 Kerry Katona has received substantial damages after taking libel action when the Sunday Mirror claimed her mother was about to expose her as a prostitute.

On 22 June the tabloid published the article in which it made the claim under the headline "Betrayed by Mum - Kerry's Mother Dishes the Dirt in Explosive New Book".

The newspaper has now said that Kerry's mother Sue never made the allegation, in a book or otherwise.

"The truth is that Sue Katona has never alleged that the claimant worked as a prostitute in the book or at any other time and such an allegation would be entirely untrue.

"Moreover, Sue Katona has not to date written an autobiography nor does she have a publishing agreement to publish such a book."

The former Atomic Kitten star was not at London's High Court for the settlement of her libel action against MGN Limited, which reportedly involves the payment of a five-figure sum and her legal costs.

MGN's advocate, Victoria Joliffe, offered its sincere apologies and said it accepted the allegations were false. The paper also published an apology yesterday.