Last night's Kids' Choice Awards went down in LA, and things started with an eclectic display on the orange carpet. Kristen Stewart showed up in a blue Stella McCartney number, while Katy Perry was another colorful attendee in a crop top and skirt. Neutrals were a big hit. Emma Stone donned Antonio Berardi, and Heidi Klum paired a Roland Mouret dress with over-the-knee boots. A tummy-baring Dolce & Gabbana bustier and skirt were Selena Gomez's pick. 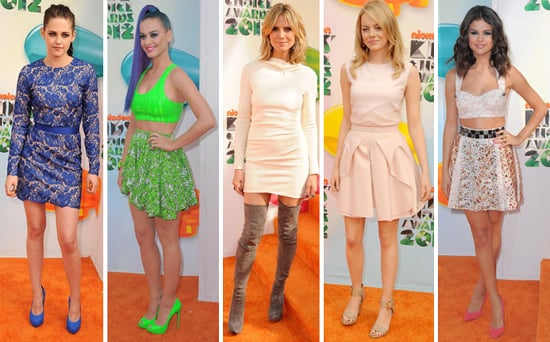 There were plenty of famous guys who turned out too. Andrew Garfield was there to keep his girlfriend and The Amazing Spider-Man costar Emma Stone company. Chris Colfer represented the Glee crowd, as Nick Cannon tried to hype up fans. Josh Hutcherson was there from The Hunger Games crew, as were many of his castmates like Alexander Ludwig, Isabelle Fuhrman, Amandla Stenberg, and Willow Shields. The stars headed inside USC's Galen Center for the action to begin from host Will Smith — make sure to check out a full list of who wore what!

To see all the pictures from the red carpet just click for more!