Brad Pitt is Jackie Cogan, a ruthless (yet amiable) assassin with a penchant for killing his victims from a distance, in the dramatic thriller Killing Them Softly. Cogan is tasked with taking down two young thieves (Scoot McNairy and Ben Mendelsohn) who knocked over a poker game. It wouldn't have been such a big deal if said poker game wasn't being put on by gangsters, and if the amateurs didn't keep bragging about their $100,000 loot. Richard Jenkins also stars, along with mob men extraordinaires James Gandolfini and Ray Liotta. 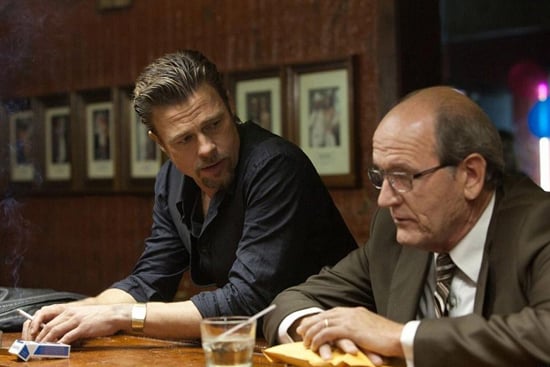 Killing Them Softly premiered at Cannes this year and garnered mostly positive reviews. Seeing Pitt and Gandolfini together again sparks memories of the two in 2001's fellow hit-man movie The Mexican, though this movie definitely looks darker and grittier. Killing Them Softly is set for release on Oct. 19, but you can watch the trailer when you read more.