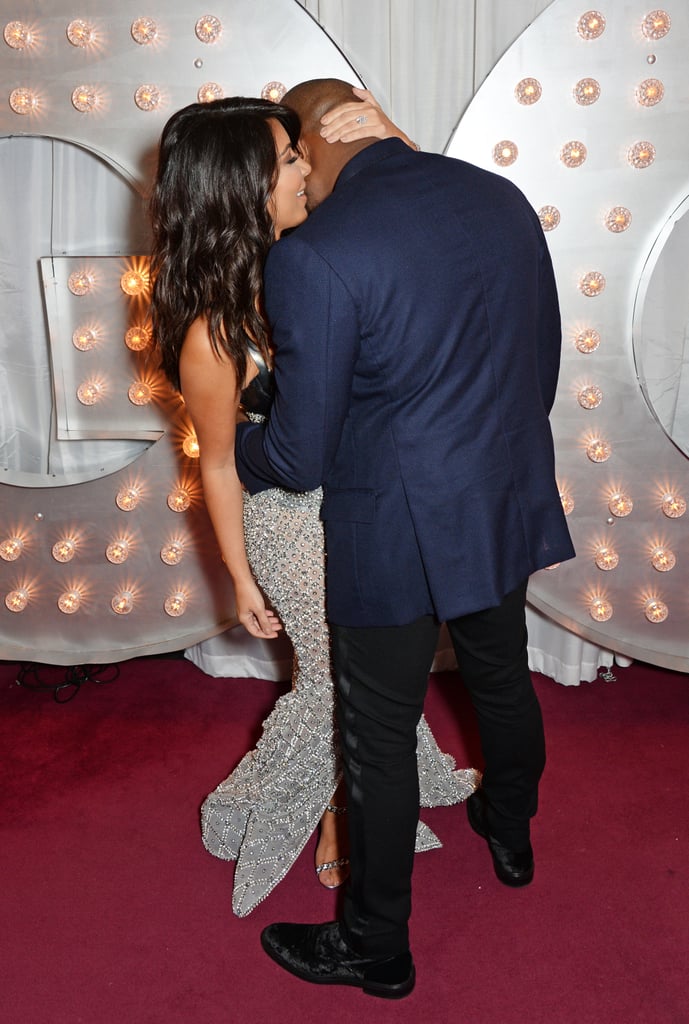 Just when you thought Angelina Jolie's wedding gown was the most interesting dress you'd see today, Kim Kardashian stepped out in a sheer beaded number for the GQ Men of the Year Awards in London on Tuesday. Kim hit the red carpet with her husband, Kanye West, who was in rare form (read: smiling) as they posed for photos with Nicole Scherzinger and her beau, Lewis Hamilton. Kim and Kanye also showed lots of sweet PDA before heading inside, where they met up with Pharrell Williams and fashion publicist Ronnie Newhouse. The rapper covered GQ's July issue and opened up about his love for Kim, saying, "Like they said in Step Brothers: Never lose your dinosaur. This is the ultimate example of a person never losing his dinosaur."

Kim and Kanye touched down in London earlier this week after attending the Made in America Festival; Kanye hit the stage to perform at both events in Philadelphia and LA, and his West Coast set brought out celebrity fans like Brooklyn Beckham and Chloë Moretz as well as his pals Beyoncé and Jay Z. The couple's cute red carpet PDA also comes just a day after the season finale of Keeping Up With the Kardashians, which aired in a two-part event that documented their lavish wedding in Florence, Italy, back in May. After the episode, Kim shared a previously unseen photo from their nuptials on Instagram. Keep reading to see Kim and Kanye in full effect at the GQ event.