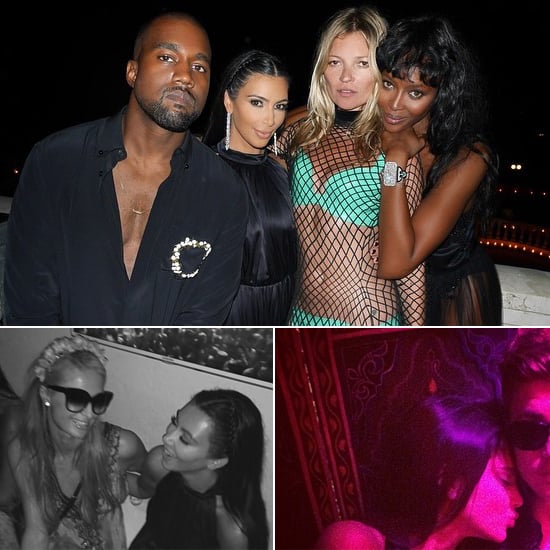 Kim Kardashian and Kanye West had a star-studded vacation in Ibiza, Spain, this weekend. After making their way back to the US, Kim took to Instagram to share the fun memories she created with several celebrities, including Kate Moss, Naomi Campbell, and Paris Hilton. All the excitement started when Kim, Kanye, and Kendall Jenner met up with Justin Bieber at designer Riccardo Tisci's birthday party on Friday and took a slew of pictures together. As the night continued, Kendall and Justin got close, snapping pictures away from the crowd.

The sisters arrived in Ibiza with their mom Kris Jenner on Friday, but Justin had been grabbing headlines at the popular celebrity destination all week. On Tuesday, Justin and Orlando Bloom had an argument while partying with pals, a video of which has since gone viral. Justin's rumoured involvement with Orlando's ex-wife Miranda Kerr in 2012 and Orlando's outing with Justin's ex Selena Gomez in April were reportedly the catalysts for their heated exchange. Meanwhile, Kendall and Selena have also been the subject of feud rumours after the ladies hung out this year. The group's drama doesn't stop there — earlier this week, Kim took to Twitter to comment on her ongoing feud with her brother Rob Kardashian's ex, Adrienne Bailon. Scroll through to see see the stars put the negativity aside and party in Ibiza.