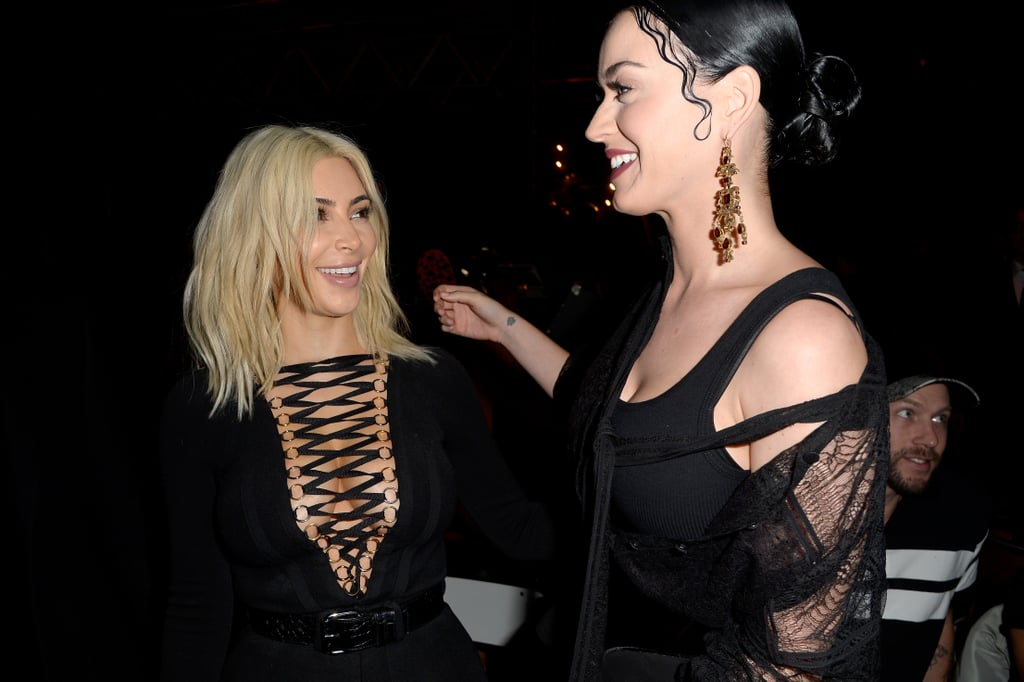 Kim Kardashian and Katy Perry shared the spotlight at the Givenchy show during Paris Fashion Week on Sunday. Although the ladies were a few seats apart in the front row, they were able to link up for a laugh-filled chat and pose for cute pictures with Kanye West. As it turns out, Kim and Katy have more in common than their love of Givenchy and relationships with hot musicians. Earlier this year, Katy inked a deal for a video game inspired by her personality. The app is being created by Glu Mobile, the same company behind Kim's lucrative hit, Kim Kardashian: Hollywood. According to reports, the app may have earned Kim a sweet $30 million payday.

Kim's appearance with Katy is just the latest in a string of moments she's shared with other celebrities during her big week in Paris. On Thursday, Kim twinned out with Jared Leto at the popular Balmain events after both stars got the Internet talking about their new blond locks. She totally one-upped Jared's hair game, though, since she opted for a lighter hue over the weekend. Even with all the time at salons and fashion shows, Kim has managed to give Kanye a lot of attention: on Friday, the husband and wife shared sweet PDA during a picture-perfect stroll. Keep reading to see the stars get social at the Givenchy show.

Celebrity Instagrams
Gwen Stefani and Blake Shelton May Be an Unlikely Pair, but Their PDA Speaks Volumes
by Britt Stephens 2 hours ago