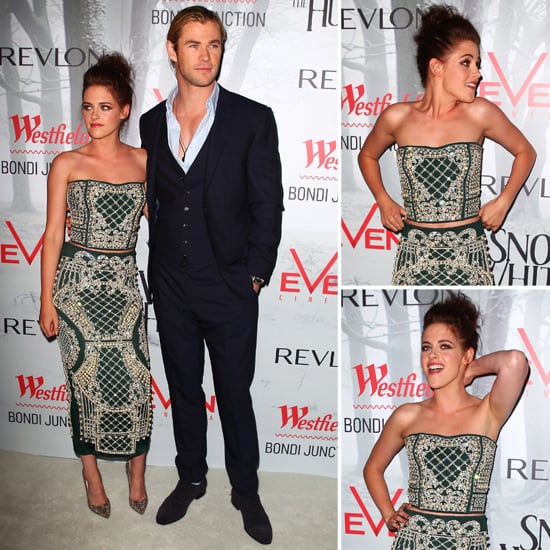 Kristen Stewart wore smokey eyes and Balmain today for the premiere of Snow White and the Huntsman in Sydney. She was joined on the carpet by her leading man Chris Hemsworth, as well as director Rupert Sanders. Kristen arrived Down Under on Sunday, and was seen yesterday meeting up with friends for lunch. Native Australian Chris arrived a few days early as well. There was even time for Chris Hemsworth to get shirtless for a pool day before his press duties commenced.

Today, Kristen had kind words for Chris and how much fun it was to work with him. She said, "He is literally one of the nicest guys I have ever met." Kristen was also asked about visiting with Australian relatives, as it's her mom Jules's native country. Kristen replied, "My relatives basically live in Vancouver now, which is very odd . . . I've only been here a few times as well, maybe two or three times not to work, and that is ridiculous. I would like to come back more." As she headed inside for the screening, Kristen, true to form, swapped her high heels for a pair of Converse sneakers.