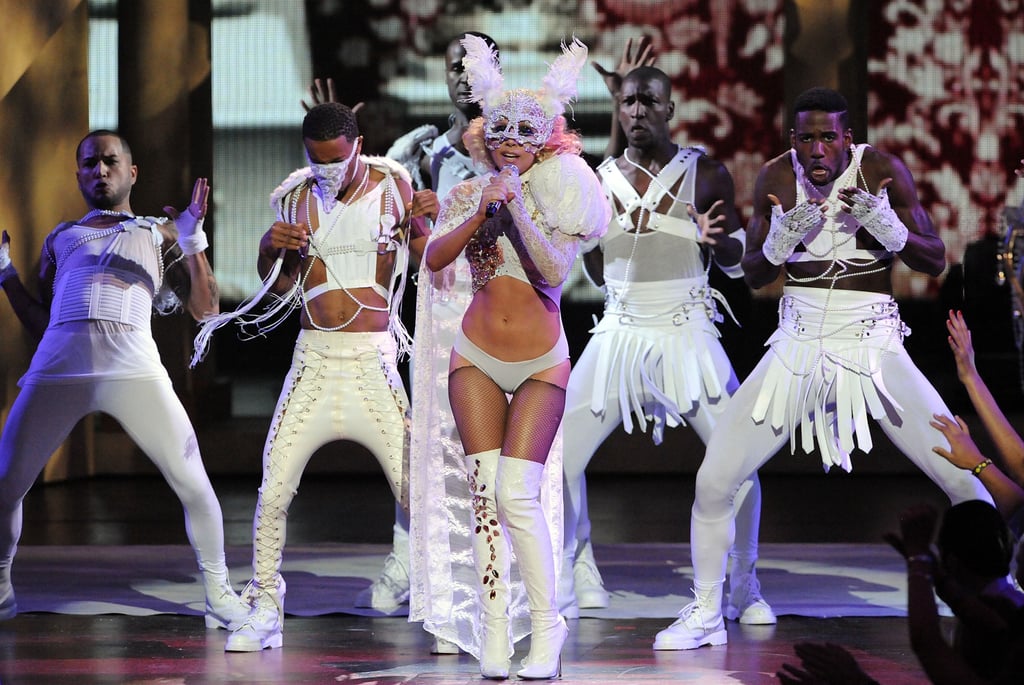 Exactly ten years ago, Lady Gaga delivered one of the most memorable MTV Video Music Award performances of all time. The pop star was just 23, and had previously released her debut album, The Fame, which spawned runaway hits like "Just Dance" and "Poker Face." The public was already intrigued by her catchy, unusual music and even more unusual style, but the performance — her first ever at a major award show— would offer a chance to prove her (now indisputable) talent within a live setting.

Her big moment was also preceded by five famous words: "I'mma let you finish, but . . ."

It's true: the 2009 VMAs stage saw both Gaga declaring herself as one of the boldest auteurs of her time as well as the inception of Kanye West and Taylor Swift's high-profile feud, which — despite momentary truces — still rages on. And though Kanye's unexpected interruption undoubtedly became the headline for the award show, Gaga's performance still stood out as a testament to her showmanship.

Suddenly. . . blood appeared, and it became apparent that this would not be a conventional performance.

How'd she manage that? With a lot of choreography, white lace, and fake blood, that's how. The performance began with Gaga laying down, singing "Poker Face" in a setting that's not not reminiscent of The Phantom of the Opera. The music transitioned into "Paparazzi" as Gaga awakened to join her backup dancers. Her famous monster claw made an early appearance. Then suddenly, among the crystals on the right side of her chest, blood appeared, and it became apparent that this would not be a conventional performance.

The energy onstage gradually became more frantic. A walking stick was thrust into Gaga's hand as she charged toward the front of the stage. The camera panned to Sean "Diddy" Combs who looked amazed, stunned, and perhaps not entirely sure how to feel about what he was witnessing. After a brief piano solo, more blood started pouring down Gaga's body. The audience cheered as Gaga, nearly in tears, sang, "I'm your biggest fan / I'll follow you until you love me." Gaga was carried off and then reappeared floating above her dancers in a harness. She dropped the microphone and stared into the distance to the sound of camera shutters. In the context of the performance, viewers just witnessed her death. In real life, it was the birth of an icon.

Gaga went on to win the award for best new artist that night, while the "Paparazzi" video also earned her awards for best special effects and best art direction. In a strange twist, Gaga was scheduled to co-headline a tour with Kanye just two months later in November. The Fame Kills tour was subsequently cancelled because Kanye decided to step away from the public eye, and Gaga instead embarked on her own Monster Ball Tour.

The three aforementioned stars still orbit each other and the award show, for that matter: Taylor is opening this year's VMAs with a song off her new album Lover. But what happened at the VMAs a decade ago is still something to pause at because Gaga's breakout moment — a grotesque exhibition that forced the public to grapple with its obsession with celebrity — was overshadowed by one celebrity interrupting another celebrity's acceptance speech. (There was of course more to it than that, but, you get it.)

Gaga performed at the VMAs again in 2011 and then in 2013, but truthfully, neither performance came close to her electrifying debut. It was a once-in-a-lifetime kind of performance, one that offered insight into what was to come. It practically goes without saying, but her career has since skyrocketed. She's experimented with genre, performed at the Super Bowl, and even won an Oscar. Who could have foreseen all that? Some who witnessed the performance in real time might have.

British Celebrities
Sinead Harnett on Moving to LA, Growing to Love Herself, and Living a Little
by Navi Ahluwalia 15 hours ago