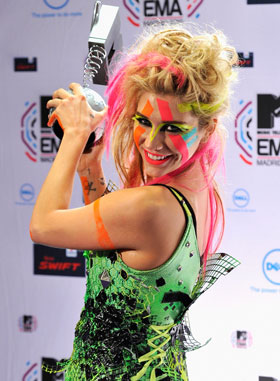 Ke$ha was colourful as she picked up her best new act gong at the MTV EMAs tonight. Lady Gaga won three awards including best female and best song, though she didn't attend.

Justin Bieber hosted the online coverage of the show via satellite link from the US and also was awarded two trophies.

Hayley Williams picked up best alternative for her band Paramore, and Katy Perry also got to take home an award as well as her new hubby Russell Brand.

To check out the full list of winners, just read more.