Metallica and Lady Gaga's unexpectedly excellent collaboration on "Moth Into Flame" at the Grammys was one of the event's most memorable moments, but lead singer James Hetfield's microphone appeared to be turned off at the start of their performance. Gaga let him share her mic and all was well, but apparently the incident left James absolutely (and rightly) furious. "I haven't seen him like that in 20 years," Metallica drummer Lars Ulrich revealed while sitting down with James Corden on Tuesday night. "He was livid. I mean, he's aged really well and he's a pretty chill guy, but the first five or 10 minutes in that dressing room was not a lot of fun." Fortunately once James cooled down, he and the rest of the band were all able to agree that the performance "made for great television." 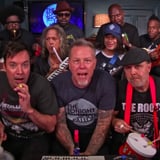