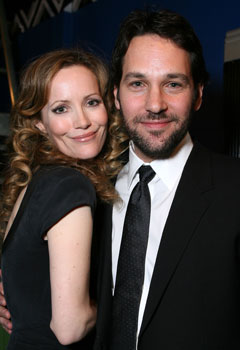 If you're a Knocked Up fan like I am, then I have full confidence that you'll share my excitement in this bit of news. Leslie Mann and Paul Rudd are set to reprise their roles as Debbie and Pete, a couple that's almost too comfortable in their marriage (Mann played Katherine Heigl's sister in the film). Mann's husband, Judd Apatow, will be penning the script and directing the comedy, which is set for a Summer 2012 release. The rest of the other details are vague, but I'm already excited that Apatow is taking a page out of one of his bigger comedies after a serious turn with Funny People. This also means that Apatow and Mann's real-life kids (who starred as Debbie and Pete's precocious daughters in Knocked Up) are likely to make an appearance as well, but here's the real question: will there be roles for Katherine Heigl and Seth Rogen?