It takes an ambitious director to take on Yann Martel's best-selling novel Life of Pi, and based on the trailer, Oscar winner Ang Lee was definitely the right choice. The story centers around Pi Patel (Suraj Sharma), an Indian boy whose family decides to move to Canada, taking with them some of the exotic animals from their zoo. The ship they're traveling on sinks in a storm, but Pi survives along with a few of the animals. After losing some of the animals quickly, Pi is left in the lifeboat with a single companion: a Bengal tiger. 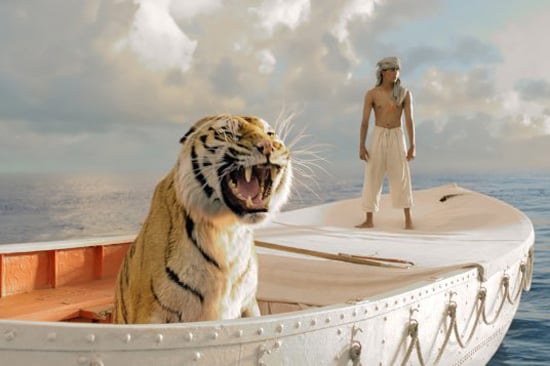 I held my breath through the first half of this trailer. It's visually stunning, and watching Pi swim through a capsizing ship is intense. However, it's after the storm has passed that the trailer really picks up speed. The scenes with the tiger are incredible, and though there are no words spoken in these clips, the beauty of the shots of India and the creatures Pi encounters while stranded on the ship are enough to make me want to see the whole film. The movie is set for a November release, but you can watch the trailer after the jump.

The Marvels
Wondering Why Captain Marvel 2 Is Called The Marvels? Here's What to Know
by Stacey Nguyen 6 days ago