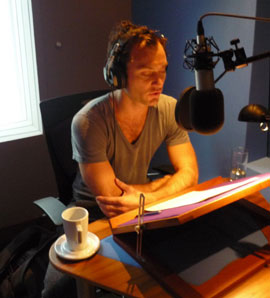 British stars including Jude Law, Daniel Racliffe and Keira Knightley have lent their dulcet tones to Valentine Voices, an initiative from the Poetry Archive and Times Online for Valentine's Day. You can take your pick from 40 love poems which can be sent to your loved one's mobile phone for £3.

Other stars reading the love poems include Joanna Lumley, Alan Rickman, Rosamund Pike, Kenneth Branagh, Patrick Stewart and Ronan Keating. We've got samples of Jude, Keira and Daniel's poems as well as Judi Dench, Helen Mirren and Stephen Fry's readings, so listen to them speak the language of love after the jump!

"She Walks in Beauty" read by Jude Law

"How do I love thee" read by Judi Dench

Full List of Valentine Voices
Alan Rickman: Upon Julia’s Clothes and Delight in Disorder by Robert Herrick
Andrew Fusek Peters: The Passionate Pupil Declaring Love
Andrew Motion: On the Table
Carol Ann Duffy: You
Daniel Radcliffe: Sonnet 130 by William Shakespeare
Helen Farish: Look At These
Helen Mirren: Wild nights! Wild nights! by Emily Dickinson and To My Dear and Loving Husband by Anne Bradstreet
Ian Duhig: From the Irish
Ian McKellen: The Passionate Shepherd to his Love by Christopher Marlowe and Sonnet 18 by William Shakespeare
Jackie Kay: Her
James Earl Jones: A Birthday by Christina Rossetti and Love not me for comely grace… by John Wilby
James Fenton: In Paris with You
Jean ‘Binta’ Breeze: Could it be
Jenny Joseph: The Sun Has Burst the Sky
Joanna Lumley: What lips my lips have kissed, and where, and why… by Edna St. Vincent Millay
Jude Law: She walks in beauty… by Lord Byron, Rondel of Merciless Beauty by Geoffrey Chaucer and Oh Mistress Mine, Where are you Roaming by William Shakespeare
Judi Dench: How do I love thee? By Elizabeth Barrett Browning and The First Day by Christina Rossetti
Keira Knightley: Love's Philosophy by Percy Bysshe Shelley
Kenneth Branagh: To a Stranger by Walt Whitman
Michael Longley: The Pattern
Mimi Khalvati: Ghazal
Pam Ayres: Yes, I’ll Marry You My Dear
Patrick Stewart: To His Coy Mistress by Andrew Marvell
Romola Garai: Dover Beach by Matthew Arnold
Ronan Keating: Is It a Month? by J. M. Synge
Rosamund Pike: Sonnets from the Portuguese iv by Elizabeth Barrett Browning, Oh! Death will find me… by Rupert Brooke, Remember by Christina Rossetti and If thou must love me…by Elizabeth Barratt Browning
Samuel Menashe: O Many Named Beloved
Simon Callow: Sonnet 61 by William Shakespeare
Stephen Fry: Now sleeps the crimson petal, now the white by Alfred, Lord Tennyson
Wendy Cope: Flowers