The times, they are a-changin' for folks in the Wild West. The trailer for The Lone Ranger depicts a world in the process of being altered forever with the advent of the railroad. Men will no longer be at the mercy of their horses to take them to far places, and with this epic invention comes crime the likes of which people have never seen. Enter peacekeeper John Reid, aka The Lone Ranger (Armie Hammer). Guided by his sidekick, Tonto (Johnny Depp), he vows to protect his native land and keep criminals at bay. 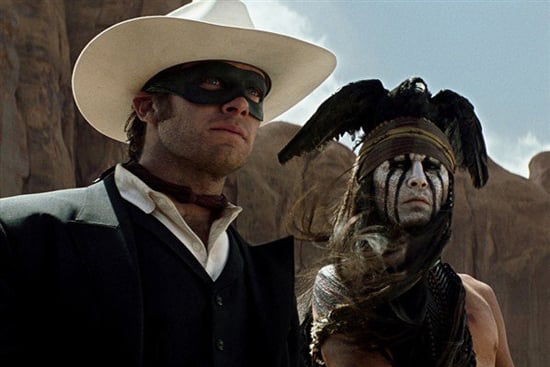 The Lone Ranger character has been portrayed in several movies and series, but I was hoping to get a few more details about Gore Verbinski's retelling. What I can tell you is that there are bandits, ladies — specifically, Helena Bonham Carter — fast-moving trains, Johnny Depp dangerously clinging to the bottom of those fast-moving trains, and saloons. The movie comes out July 3, and you can watch the trailer after the jump.