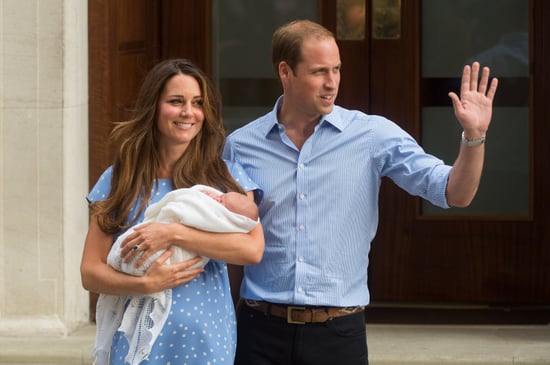 After introducing their new prince to the world, the Duke and Duchess of Cambridge shared the royal baby's name. Like Queen Elizabeth II, the baby has three names — George Alexander Louis. He will be known as His Royal Highness Prince George of Cambridge and by the nickname "Georgie," according to Prince Charles. Obviously, a lot of thought goes into choosing a name for a future monarch. Thus, each name has historical significance. We're breaking it down for you, starting with the last name first. Just keep reading.

Now there's a catch. Often royals look for something more specific. Prince Andrew, the Duke of York, and his children, Beatrice and Eugenie, are often called the "Yorks." And Prince Harry and William have used "Wales" as a last name while in the military, reflecting their father's position as the Prince of Wales. Thus, we can expect the new prince to perhaps use "Cambridge," since his parents are often referred to as the Duke and Duchess of Cambridge, although technically the last name will still be Mountbatten-Windsor.

George
When he ascends to the throne one day, the newest British royal will presumably be King George VII. George is an important name in the Windsor family, as it was the name of Queen Elizabeth II's beloved father, King George VI, and grandfather King George V. Note that the queen's father was actually born Albert Frederick Arthur George but took the regal name King George to signal continuity with his father following the abdication crisis that resulted when his brother stepped down to marry divorcée Wallis Simpson. Thus, George is a name that evokes tradition and confidence in the monarchy. Also, St. George is the patron saint of England.

Alexander
Alexander likely references the new family's link to Cambridge. Royal ancestor Alexander Cambridge, born in 1847, was married to Queen Victoria's granddaughter. It could also be a way to honor the queen. Alexandra is her middle name (her full name is Elizabeth Alexandra Mary).

Louis
The new prince shares the middle name Louis with his father (his full name is William Arthur Philip Louis). Some might have expected Charles or Philip as a middle name, to honor William's aging grandfather, Prince Philip, or his father, Prince Charles. But Louis might be an even better tribute to both men. Louis was the name of Lord Mountbatten, the uncle of Prince Philip. The statesman and naval officer was killed in 1979 in an IRA terrorist attack in Ireland. Before he died, Lord Mountbatten played a huge mentoring role in Prince Charles's life. The two, pictured below, often referred to each other as "honorary grandson" or "honorary grandfather."

Image Source: Getty
Georgie Will Be His Nickname! The Significance Behind the Royal Baby's Name  originally posted on POPSUGAR Celebrity News
Around The Web