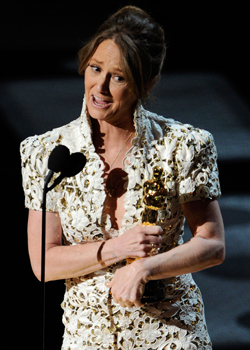 I'm live in the Oscars press room where the winners are stopping in after collecting their trophies. First up is best supporting actress winner Melissa Leo, who was glowing about completing her award season sweep for her role in The Fighter. She apologized for her F-bomb and gushed about Kirk Douglas, but was a bit short about her recent Oscar campaign:

On swearing during her speech: "I had no idea. Those words, I apologize to anyone that they offend. There's a great deal of the English language that is in my vernacular . . . I really don't mean to offend, and probably a very inappropriate place to use that particular word in particular."

On Kirk Douglas stalling the winner announcement: "You know, it's really funny, you know, because he's an old actor. If anybody is an actor, he's an actor, right? And actually, he was doing us all this huge favor, because the longer he strung it out, the calmer I got to be. I got to take more than one glance over at Amy, who was sitting just in front of me away from where he was. I wanted to watch him, because he was delightful to watch, and I wanted to peek at Amy, so he strung it out in a rather delightful way for me and actually allowed a heart rate that had gotten fairly high as the category was announced to settle a little bit and wait and see what the envelope said."