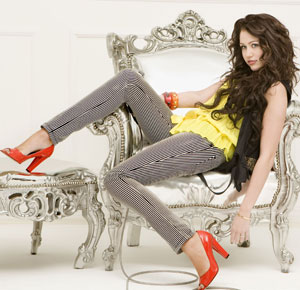 Chances are if you're based in the UK and have a younger sibling or a young child then you have an opinion on Teen Choice Awards host Miley Cyrus, of Hannah Montana fame. So here's your chance to tell me how you feel about her!

Kids and tweens mostly adore her, adults are aware of her from that controversial Vanity Fair photo among other things, and she's the daughter of Billy Ray Cyrus – whose song "Achy Breaky Heart" I remember dancing to at school discos.

Miley's releasing "See You Again" on August 25 in the UK, and it's a dancey number with a rather robotic-sounding vocal. I'm not a huge fan of this one and I think the tween queen has better songs, but I want to know what you think. Let me know!

Anne-Marie
Anne-Marie and Little Mix's New Video Is Basically Bridesmaids, but With Versace Robes
by Navi Ahluwalia 19 hours ago