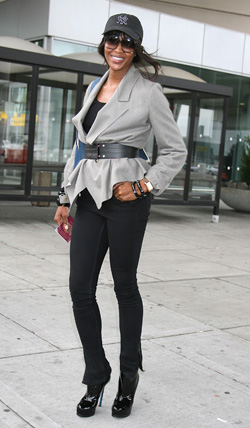 The tale of Naomi Campbell and British Airways just gets stranger, with reports that Naomi is boycotting the airline, having claimed that BA asked her back.

British Airways reportedly banned Naomi from flying with with them earlier this month, following a certain incident involving missing bags and alleged spitting, which led to Naomi's arrest at Heathrow Airport.

Naomi happily posed for the cameras when she arrived at JFK Airport yesterday, having taken a Virgin Atlantic flight from London's Heathrow Airport.

She had been pictured at Heathrow Airport before boarding the New York bound flight, smiling with a pair of women police officers. Wonders will never cease.

Architectural Digest
See Inside New Mom Naomi Campbell's Home in Kenya, Complete With a Pool in the Living Room
by Lauren Harano 4 weeks ago