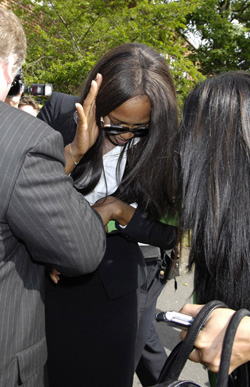 As expected, the supermodel arrived at Uxbridge Magistrates' Court today.

She admitted six offences relating to the incident, and is charged with three counts of assaulting a police officer plus disorderly conduct and being abusive and threatening to cabin crew.

Naomi's spokesman, Alan Edwards, said the incident had been "regrettable" and Naomi wanted to tell her side of the story to the magistrates.

The harshest sentence that could be imposed includes substantial fines and up to six months in jail.

Stay tuned for more details as we have them.

UPDATE: It is being reported that Naomi pleaded guilty to four of the six charges, with the Crown Prosecution Service dropping the other two charges.

UPDATE: Naomi Campbell has been sentenced to 200 hours community service and has been fined £2,945 pounds.

Architectural Digest
See Inside New Mom Naomi Campbell's Home in Kenya, Complete With a Pool in the Living Room
by Lauren Harano 3 weeks ago

Celebrity Kids
Naomi Campbell Is a Mum! Everything We Know About Her Baby Girl So Far
by Alessia Santoro 3 weeks ago